This book by Sheila Lawlor looks at the political decisions taken by Churchill and the War Cabinet in the early period of the war when Britain was largely fighting alone. It shows that Churchill was not quite the bombastic gambler as sometimes portrayed. In fact, at times he was cautious when others were perhaps hasty in their desire to act. 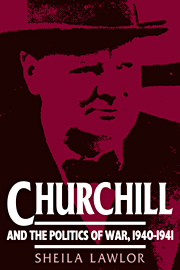 The first part of the book looks at how Churchill came to power after his 'wilderness years'. In his own history of the war, he views himself as the man of destiny when in reality he played a shrewd political game, balancing his criticism of Chamberlain with avoiding the accusation of disloyalty. His restraint in not deploying scarce resources to France was a consistent feature of his later strategy.

One snippet from the book I hadn't seen before was the analysis by Sir John Dill (CIGS), in July 1940, that he believed Hitler would try the indirect approach, invading Britain via Ireland or Scotland, possibly the Orkneys and Shetland. That is an interesting 'What-if' for wargamers!

The second part of the book moves to the Middle East and the defence of Egypt. The author looks in detail at the difficult decisions that had to be taken in terms of allocating resources there at a time when the invasion of Britain was still a possibility. Eden and Wavell were focused on the desert war, and they were concerned over Churchill's rhetoric towards supporting the Greeks following the Italian invasion. In fact, Churchill was more cautious than his rhetoric appears, a  stance that was not obvious to close colleagues on the ground.

The third part, and the most interesting from my point of view, is Britain's approach to the Balkans from January 1941, and the decision to intervene in Greece. The author has drawn upon official minutes and private papers to show the views of the main players, including the military and political leadership. Churchill alternated between reluctance to intervene in Greece and confidence, partly based on optimistic military appreciations on the ground. Interestingly, almost all the key players favoured giving Turkey priority in terms of troops and equipment. Turkey was regarded as the key to the Middle East, something with the benefit of hindsight we have perhaps forgotten.

This book shows that the decisions were more complex than the broad sweep of the historiography of the period might show. The records show that Churchill was often hesitant in the face of conflicting advice, which is understandable given the scarcity of resources and the consequences of getting it wrong. But it varies from the confident narrative in his own post-war account.

This is perhaps a bit too detailed for the general reader and at times can be a little repetitive. However, by taking the reader through the views of each of the key players, you get a clearer view of the factors that made up these very difficult decisions.

As you can see from my tabs - this is a source I will return to! 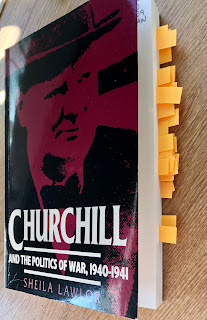