As I start to develop my Oathmark nations, I remembered that I have some unpainted fantasy figures in the Conan game box that I backed on Kickstarter. I had painted some character figures for a participation game at Carronade in 2017, but the bulk of the figures remain untouched.

The barbarian types are pretty good sculpts, if lacking in variety. I added a character figure as a Shaman to lead them. 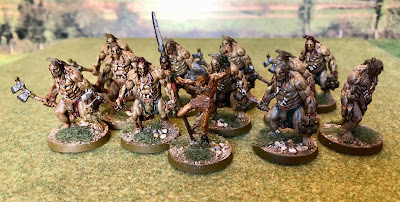 I have made a start on my Oathmark nations. Years ago I used to use a programme called 'Campaign Cartographer' for this sort of thing. Looking at the examples published on the Oathmark Facebook page, I plumped for Inkarnate, an on-line tool, which does the same thing, only much better.

It really is a very flexible map making system, and reasonably priced as well. I could have used Photoshop, like Henry Hyde, who has published some helpful tutorials, but this platform takes a lot of the hard work away. It's also a lot of fun.

Anyway, here is my first go. A lot more detail to be added, but it is a start. 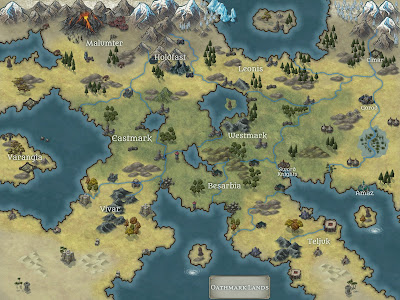 Oathmark is more a Dark Ages setting than the traditional High Medieval fantasy settings. So I am going to have Normans and Saxons in the middle, Scots to the north, Vikings to the west, Nomadic tribes in the east, with Byzantine, Spain and the Seljuks in the south.

This has also been an excuse to tidy up my eclectic collection of fantasy figures. Some rebasing and improving my painting from many years ago. 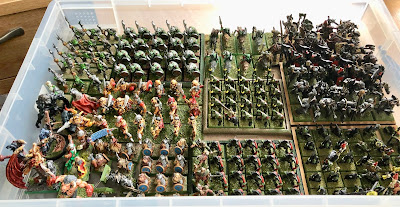