Armies of the Thracians and Dacians

This is the latest in the Pen and Sword Armies of the Past series, written by Gabriele Esposito, looking at the Thracian and Dacian tribes from 500BC to AD150. Along with the Illyrians and the passing Celts, the most important Balkan tribes of antiquity. 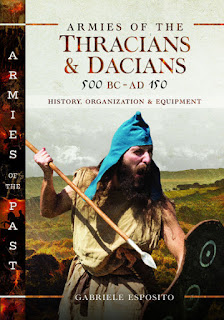 The bulk of the text is devoted to the military history of these tribes, or more accurately, tribal federations.

The Thracians largely occupied the southeast corner of the Balkan peninsula, across modern-day Turkey, Greece and Bulgaria. This is a strategically important position and therefore prey to powerful empires. Firstly the Persians, then Greeks and finally the Romans. All these empires struggled to effectively control the warlike Thracians, particularly in the mountainous areas of Thrace. They also provided mercenary contingents for all these powers. When the tribes combined, they could be a formidable threat. In 429BC, the Odrysian Thracian Kingdom assembled an army of 150,000 warriors and successfully invaded Macedonia as allies of Athens during the Peloponnesian War. It is worth considering what a state of this size could have done if they had remained united. Fortunately for their neighbours, this level of unity was rare.

The Thracians eventually became part of the Roman Empire, although not without regular revolts.

The Dacians became a distinct people from the Thracians around 700BC, centred largely on modern-day Romania. They came under pressure from the Scythians and then the Celts, and finally the Romans. The Dacians had incorporated either by conquest or allied with other tribes in the region. Most notably the Bastanae and the Sarmatians. The latter provided cavalry, both light horse archers and heavily armoured shock cavalry.

Rome fought a series of wars with the Dacians, most famously led by Emperor Trajan. This is recorded in Trajan's Column in Rome. Although defeated, the Free Dacians continued the struggle, and the Romans eventually abandoned Dacia and retreated to the Danube.
Militarily, the typical Dacian warrior fought in a Warband armed with a sword, spear and shield. The best warriors were armed with the fearsome falx. The typical Thracian warrior was a lighter peltast armed with javelins. Although they did have their own version of the falx, called the rhomphaia. Although this would be more common in Dacian armies who had access to mineral wealth, few troops had armour. Even so, it would mainly be limited to the nobles.
The military history is essentially a summary of secondary sources, done well but nothing really new. The chapters on military organisation and equipment are stronger. However, the real strength of this book is the numerous (about one-third of the content) colour plates of reenactors in Thracian and Dacian costumes and equipment. These come from the Ancient Thrace and Historia Renascita groups, who have clearly put in a huge amount of effort. I would recommend their Facebook groups.
This book is worth the price for these colour plates alone. For wargamers put off the Thracians by the complexity of the costumes, it appears that they largely disappeared after Alexander and, in any case, were less complex than my figures above.