This is Leland Ness and Bin Shih's study of Chinese ground forces during the Second Sino-Japanese War 1937-45. I have read several studies of this and the earlier conflict, but little has been published about the Chinese army. This book fills that gap. You can also pick up the ebook at half price from Helion, which at £10.99 is a bargain I could not resist. 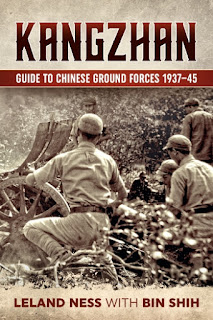 The Chinese army during WW2 doesn't get good press when it gets a mention at all. General Stillwell's frustrations about getting them into combat are pretty well known. It is certainly the case that Chaing carefully husbanded his forces for the battles to come with the communists, but that doesn't mean there wasn't plenty of fighting.
The opening chapters give an overview of the fighting in China and with the British and Americans in Burma. Rana Mitter's book 'China's War with Japan 1937-1945' deals with this in more detail, although it is weak on the operational level. For the earlier 1928-37 fighting, I would recommend Philip Jowett's 'The Bitter Peace'. China is a large country, and the similarities between the Japanese advances and the Germans in Operation Barbarossa are evident. By October 1941, the Japanese had lost 132,000 men in action and a further 87,000 from disease and permanent disability. The Pacific War drew away Japanese divisions, although the conflict still raged, tying down significant numbers of Japanese troops until 1945.
The Chinese also fought hard in the Burma campaign, fielding three armies, totalling over 100,000 troops. They suffered over 50% casualties. This was important to the Chinese as Burma was the main supply route into China. The Chinese lost a further 67,000 men in the second Burma campaign during 1944-45. There is also a chapter on guerrilla warfare.
The narrative history of these campaigns is clearly explained, along with plenty of photographs. However, the strength of this book is its coverage of the organisation and equipment used by the Chinese army. This is a complex subject as many divisions were not under Chaing's direct control; they were directed by a range of warlords, each with their own agenda. The central divisions were the best equipped, benefiting from Lend-Lease equipment. The chapter on organisation attempts to make sense of this variety and the development of the organisational model. There were even five cavalry armies in December 1944.
Armoured units had various pre-war tanks, including British, German and Italian light tanks, plus Soviet T26s. Later in the war, the Americans equipped three-battalion tank groups with Sherman and Stuart tanks. Artillery was much prized by Chaing and the warlords resulting in a wide variety of models. Heavy mortars were also a feature of Chinese divisions. The Germans introduced anti-tank guns to the Chinese, and although light by European standards, they were still effective against the largely light Japanese tanks.
Finally, the appendices have many ORBATS, troop dispositions and other data. Just about everything you need to wargame these campaigns can be found in this book. By any standards, this is an impressive piece of research.
Onto the tabletop. I have Chinese forces for this conflict in 15mm, and Blitzkrieg Commander also has an army list. The Chinese troops are defending a tree line and stream as the Japanese advance. Fanatic status in these rules has several advantages, not least in doctrine, but unlike Bolt Action, it is not quite as effective in the full-frontal assault. And so it proved with the Chinese holding off both the infantry and the armoured attacks. 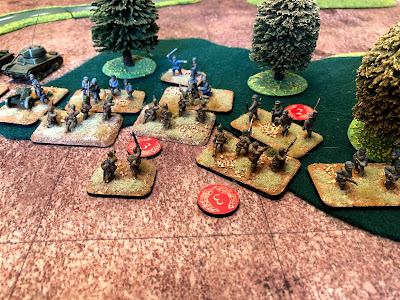 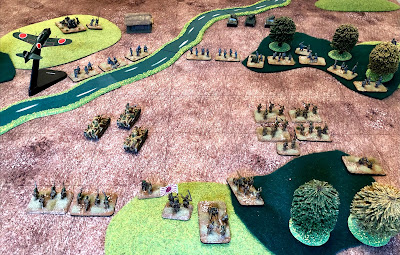