This is Brian Catlos's new history of Islamic Spain. The joy of bookshops reopening and discovering I have an unspent book token, resulting in a book that interested me but I wouldn't have purchased online. I am glad I did. My understanding of this period is deeply influenced by one of my favourite films, El Cid. More Sophia Loren than Charlton Heston, if I am honest. Needless to say, Holywood was somewhat adrift from the actual history, although the film does capture the shifting alliances well. 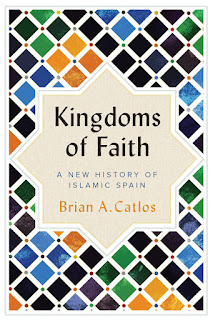 The big picture starts in 711 when Tariq ibn Ziyad arrives in Spain (Gibralter is named after him) and defeats the Visigoths. Al-Andalus develops over the next three centuries into an Arabo-Islamic society. From around 1000, the empire starts to collapse, and the Christian states start to 'reconquer' Spain. This ends in 1492 with the conquest of Grenada and the enforced conversion and then expulsion of the Muslim population.
The traditional view of the period has a presumption that religious ideology is at the heart of this history. Christians and even Jews are described as 'Europeans', and Muslims are 'Moors'. In fact, most Muslims were of indigenous descent, with very few coming from North Africa. And most of the armies that fought over al-Andalus included Muslims and Christians fighting side by side. The bit the cinematic El Cid got partly right.
Catlos takes the reader through the various rulers of al-Andalus, who were often at odds with the ruling caliphates in the Middle East. The Umayyads essentially lived on in Spain after they had been superseded elsewhere. Abd al Rahman was one such Umayyad ruler who turned al-Andalus from a patchwork of power sharing arrangements into a cohesive state. These included provinces and marches (or thugur) frontier zones where civil and military authority was not separated.
Another myth dispelled for me in this book is the Song of Roland, which turns out to be late-medieval fantasy. I have visited the pass at Roncesvalles and seen the stone. It is at least a great view! 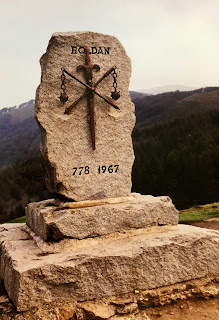 Charlemagne's campaign came about because he was invited by the Arab governors of Barcelona and Zaragoza to support them against the Umayyads. He was ambushed at Roncesvalles on his way back to Aquitaine as a consequence of Basque treachery. Charlemagne dealt with Muslim kings in the same way as Christian ones.
I also hadn't realised that the Vikings not only raided Spain, but got as far inland as Seville. Looting it in 844. Having their ships attacked by 'Greek Fire' was a bit of discouragement that the Anglo-Saxons and Scots could have benefited from. I was also pleased to see that my beloved Balkans are not missing from the story. Alongside North Africans, the most influential element in the caliphal administration was the Saqaliba, or 'Slavs', slaves and freedmen who were trusted because of their social isolation. They served as governors, diplomats and military commanders.
The portrayal of a grand Christian-Muslim conflict was largely written by foreign clerics. The later Muslim Taifa kingdoms employed Christian kinghts and the Christian kingdoms did the same in reverse. At the Battle of Cabra in 1079 both Tiafa armies were led by detachments of Castlian knights, including one Rodrigo Diaz de Vivar (El Cid). The supposed icon of the 'reconquest' spent much of his career defending Muslim kingdoms against their Muslim and Christian enemies. Holy war rarely determined to actions of El Cid and others like him. The later Almohads may have presented their wars of conquest as jihad, but they were as pragmatic as their Christain opponents. Even later in the 'reconquest', the Christian kingdoms of Aragon and Castille employed Muslim mudejares and North African mercenaries. Sultans were even granted knighthoods by Castile.
The clerics also ignored the high culture of al-Andalsus, which included a library in Cordoba that contained over 400,000 books. What I would give to have seen that! Knowledge and science were highly regarded in al-Andalus, although so was warfare and treachery. The superb cuisine occassionally contained something more deadly than flavour!
The fate of the last Kingdom of Grenada was sealed by the royal marriage that unified Castile and Aragon, although it took some time and Muslim disunity before it was completed. Only then did the religious persecution begin in ernest leading to revolts and exile.
The key message in this book is that the history of al-Andalus is not one of a foreign occupation. It is an integral part of the historical process that created modern Spain and Portugal, if not Europe as well. Islam, Christianity and Judaism are all linked elements of the wider venture we call 'the West'.
An excellent book, which will encourage me to dust down my armies of the period in 15mm and 28mm. You can also use 100 Years War units if you take the part of John of Gaunt, who sought to enforce his title, 'King of Castile and Leon' in 1386. This story is told in the May 2021 edition of the BBC History magazine by Helen Carr who also has a new book out on John of Gaunt. A purchase for my next visit to the bookshop!