Very unusually for me, I have reached the end of my 'to read' shelf, at least for hard copy books. The ebooks folder is still bulging with content. The last book was Sword of Scotland by Anthony Leask, an overview of Scotland's military heritage from ancient times to the present day. 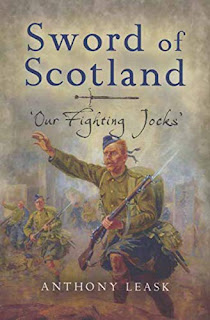 I think I picked this up a few years ago as a remainder copy. It is the sort of book you might buy after visiting Edinburgh Castle or one of the many fine regimental museums we have in Scotland. It has an easy reading style and quickly covers a huge subject for the casual reader.

It doesn't pass on the more difficult periods, for which we have limited sources. This is particularly true for the chapters on early Caledonia, early medieval and the first kingdom. One source I would have avoided is Shakespeare, whose Macbeth defames a King who was probably not nearly as wicked as portrayed by the Bard. Sources are still an issue even when we get to the medieval period and the wars of independence. However, describing William Wallace as 'of Lanarkshire' is a bit odd. His early life is far from clear, but most historians put him in Elderslie, which is in Renfrewshire.

Once the chapters leave the medieval period, we are on sounder territory. The Jacobite rebellions are given a balanced treatment without falling into the England v Scotland trap. There is also no downplaying of the role Scottish regiments played in the expansion of the British Empire, from the Napoleonic Wars to the colonial campaigns of the 19th century. By the First World War, there were 22 regular battalions, which grew to a staggering 226 during that conflict. That is 200,000 men, which doesn't include those who served in the Royal Navy or the Royal Flying Corps, not to mention the Home Front. There are no accurate records of those who died, but more than 148,000 Scots are commemorated in the Scottish National War Memorial in Edinburgh Castle.

The final chapter covered Scotland's military heritage and was written when the infantry regiments were being merged into the Royal Regiment of Scotland.

This book does what it probably set out to achieve for the casual reader. I do have one issue with a consistent theme, the idea of the martial race. Right from the outset, the author talks about "A fierce spirit of independence of family and clan was bred in the soul of its people from these early beginnings. From these roots grew the martial spirit which was to characterize (odd US spelling) the Scottish nation throughout much of its history."

Later we are told the Vikings left their mark "by the infusion of their fiery blood into the local populace." The martial races theory was much loved by the British Empire, particularly in India. It was primarily a means of divide and rule with little evidence to support it. There are many explanations for Scottish troops' fighting skills and undoubted bravery, but I don't think we need to find a dubious genetic explanation.

That issue aside, if you are visiting Scotland, you could do worse than skimming this book for the background to a trip to our many military sites. Thankfully that is now possible once again.