The latest Nigel Tranter novel in my bedtime reading project is 'High Kings and Vikings', which covers Scotland at the end of the 10th century. 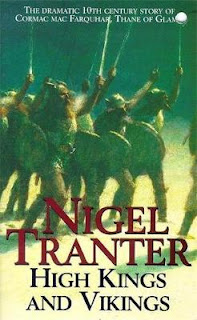 This was a particularly violent period, both internally and externally. Scotland had an unusual succession system for its monarchs known as Tanistry. This meant all the male descendants of previous monarchs were eligible for the throne and were elected from the seven Mormaers or sub-kings. The advantage of the system was that, in theory, the best candidate was chosen, and the kingdom was never left with a child King. The downside was that the losing competitor was unlikely to be happy.
This happened at the end of the 10th century when two monarchs were killed, Constantine III and Kenneth III, in fairly quick succession. This leads to Malcolm II (the Destroyer) gaining the throne in 1005. He reigned for 29 years.
The external challenges came from the Vikings who attacked Scotland in the usual raids and a large scale invasion from Norway. The Saxons also challenged the southern border in the Lothians. This was the period when Strathclyde became part of the kingdom.
Tranter often uses a fictional character to tell the story. It has to be someone close to the action, and in this book, he invents Cormac mac Farquhar, Thane of Glamis. Glamis is better known today for its Victorian 'castle', family home to the Queen Mother before her death. In the 11th century, there was a royal hunting lodge, but the first real castle wasn't built there until the 14th century. A Thane held his lands directly from the King rather than the local Mormaer.
Cormac manages to capture some Viking longships and uses these to attack Viking raiding parties. The Vikings left their ships weakly guarded while they raided inland, leaving them open to this sort of attack. Cormac eventually builds up a significant fleet using the local fishermen to crew them on a part-time basis. This takes him up and down the coast, and he gets involved in most of the major events of the period. He befriends Macbeth, who becomes the Mormaer of Moray and Ross, although somewhat earlier than the real Macbeth in this telling. The next book chronologically covers Macbeth. Spoiler alert, it isn't like the Shakespeare play!
The book ends with his son becoming the local Mormaer. This followed a campaign in Northumbria, led by Malcolm II, which ended badly at the siege of Durham in 1016. Despite this setback, Malcolm held onto Lothian, which was later settled in Scotland's favour at the Battle of Carham in 1018. The Northumbrians were led by Earl Uhtred, a name familiar to Bernard Cornwell fans, although this one is somewhat later chronologically.
As an aside, Tranter was pretty scathing about history teaching in schools. Last night Muriel Gray tweeted a copy of a 1944 Scottish history exam paper, which includes Carham. I suspect few pupils today would be able to answer that question. 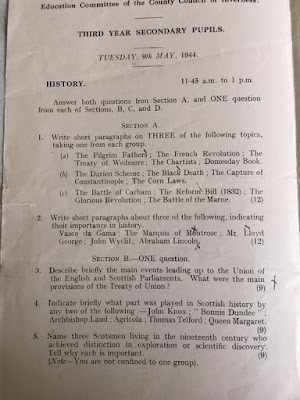 Getting this onto the tabletop, I decided to go for the campaigns against the Northumbrians as I did the Vikings last time. I used figures from my 28mm collection and ADLG rules. 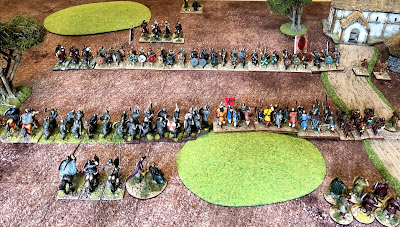 The heavier Saxon Northumbrians have more staying power in ADLG but no more combat punch. The lighter Scots tried to work around the flanks to little effect. In a shieldwall battle of attrition, the Saxons just nicked victory. 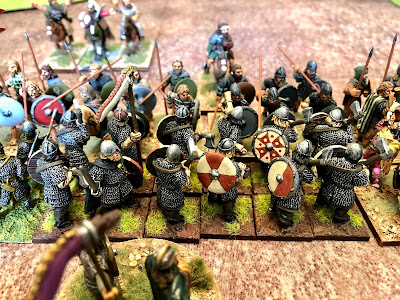 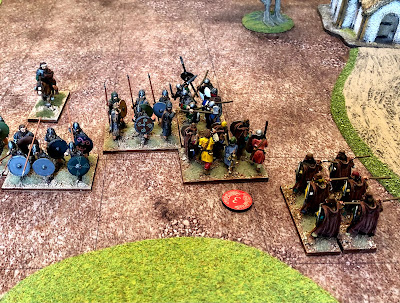