The new 4th edition of the popular ancient and medieval rules L'Art de la Guerre (ADLG) arrived this week. To the Strongest! is probably my favourite ancient rules, but I play ADLG a fair amount. It is the ruleset of choice for most 15mm players in Glasgow, and there is an active competition scene. 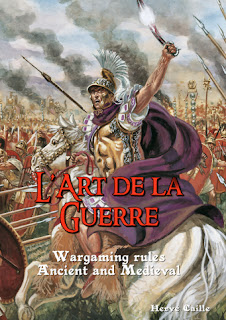 For those unfamiliar with these rules, they are an element based game using standard base sizes (40mm frontage in 15mm). They provide a fairly quick game, typically requiring a smaller number of figures and a smaller tabletop. A 15mm game comfortably fits on the average dining table. Unlike many rules, the book comes with everything you need, including 300 army lists and a laminated quick reference sheet.

I don't play ADLG in competitions, so the subtleties of the v4 changes might be lost on me. For a more comprehensive overview of the changes, you can visit the Madaxeman blog and website, which has lots of resources for the game. There is an interview with the author on the No Dice No Glory blog and in this month's Wargames Illustrated. There is also an official list of changes on the ADLG website.

For those familiar with the game, the changes are not huge. Flank attacks are more deadly due to combat bonuses being added in. Heavy infantry move a bit quicker in the early moves away from the enemy, and you can move and extend in the same movement. There is also some tidying up of the rules on confirming, which I suspect is mostly to address competition issues.

The army lists have been revised with more options. This does mean some points changes, which I discovered with my Wars of the Roses armies. So, you will need to check your lists before playing. There are 18 new lists with some interesting Scots and Irish armies I will need to look at. Nothing new in the Balkans though!

Troop types are also revised. Longbows become medium swordsmen after 1415, which give them a bit more staying power in combat. Polearms are now distinct from other 2HCW and give a decent defence against cavalry. Light artillery can move and shoot, and war wagons are more manoeuvrable. Cataphracts are improved, and various exotic types are added, including armoured elephants and various incendiary weapons.

The terrain set up rules have also been changed, and some new optional rules, including random events using playing cards.

I have just finished my Wars of Roses project, so this was an opportunity to get them onto the table. The army lists are changed, so I had to redo them. The big changes are the longbowmen and the new polearm classification for the billmen. You save a point for longbowmen, so I could field more retinue types rather than levies. 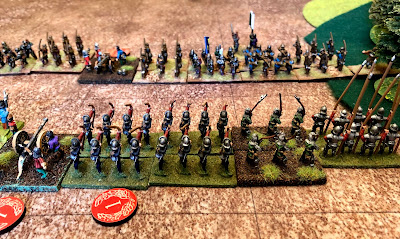 Tactically, the Medium Swordsmen classification for the retinue longbowmen meant I was more willing to let them get stuck in rather than just shoot away. It means the battle line stays together, which looks more historical. They are still at a disadvantage to armoured billmen, but not by too much, especially if you have disordered them with bow fire. There aren't many mounted units in a WoR army, but the billmen did hold their own in the one combat we had. 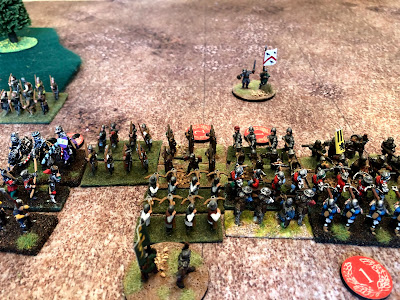 Early days, but I agree with others that the changes look about right. More a tidying up than a major rewrite, but enough new content to justify paying for a new edition. Merci, monsieur Caille!