On returning from Budapest I was pleased to see the main feature in this month's Wargames Illustrated is the Siege of Budapest in early 1945.

The battle was one of the longest (102 days) and most costly city sieges of WW2, coming second only to Stalingrad in terms of human trauma. Nearly a million civilians were in the city when the Soviets attacked and few were evacuated.

Wargames Illustrated focuses on a couple of interesting units involved in the siege and the preliminary battles on the Hungarian plain. The 13 Panzerdivision Feldherrnhalle had its origins in the SA or Brown Shirts. After their leadership was eliminated in the 1934 Night of the Long Knives the SA regained some standing in the Nazi organisation and formed the basis for this division in October 1944. It was the key German unit in the defence of the city.

Another article looks at the Hungarian assault gun forces. In addition to German equipment they had the locally manufactured Zrinyi Assault Howitzer and Turan tanks. These were formed into eight assault gun battalions in support of Hungarian infantry.

For a detailed history of the siege I would recommend 'Battle for Budapest' by Krisztian Ungvary, published by Tauris. This author had access to German and Soviet archives and takes the reader through the battle week by week.

In the Citadel museum in Budapest there is a large collection of photographs of the city during and after the siege. It is amazing how well the city has been reconstructed given the damage. The picture below was taken in the museum that is situated in the anti-aircraft control bunker. 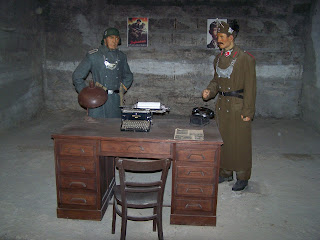 Posted by Balkandave at 23:18 No comments:

I have just finished reading Paddy Griffiths 'The Viking Art of War'. As always with this fine historian he gives the reader much more than a narrative history. In this book he explains who the Vikings were, the causes of their expansion and how they used their strategic mobility. He then sets out their strategy, battle tactics, army composition and arms and armour.

Sadly he debunks many Viking myths like the Berserkers and Jomsvikings. Recognising that the historical sources are limited for this period, he none the less sets out a more credible explanation of Viking strategy and tactics than the well known popular images.  He does this by applying modern military thinking to challenges the Vikings faced.

The Vikings were not the supermen of myth. In fact they probably lost more battles than they won. This is not surprising when you consider that they fought in a similar way, with similar weapons as their opponents. They brought few if any technological developments, even their ships were only a modest improvement on existing naval architecture. They were effective in small raids when the opposition was not organised to resist them and on the fringes of Europe. They also fought amongst themselves as often as their neighbours. National organisation was at best a loose control and they rarely organised into the 'great armies' that did have a major impact on the history of France and England in particular. They were effectively countered by states that used fortifications and the strategic mobility of mounted troops.

What they did possess was exceptional energy and enthusiasm and whilst they have left a small historical footprint, their achievements were significant. Vikings fought as far away as the Middle East, travelling vast distances in modest sailing boats by modern standards. They excelled at deception and surprise and their strategic mobility caused the great empires of the period huge problems. In the places they occupied, rather than simply raided, they assimilated quickly into the local population. Most famously of course they morphed into the Normans, who themselves ranged far and wide.

Great book and highly recommended.
Posted by Balkandave at 15:38 No comments:

First run out today with FoG Renaissance. Of the first army book I could field Austrian Imperial and Translyvanian armies.

The dice gave me the Austrians. Good solid infantry centre with strong cavalry wings of Kurassiers and Hussars. My equally green opponent diced for the Translyvanians led by Bethlen Gabor. Weaker infantry but an array of traditional lancers, armoured cavalry together with mercenary Kurassiers.

The rules encourage historical deployment and we both stuck to this. The light cavalry skirmished on the wings whilst we got to grips with the often subtle differences with the ancients FoG rules. Commanded shot between my Kurassiers worked well against the Szekler and Viteji cavalry. Artillery doesn't move after deployment but was useful in softening up before the infantry got into range. Some poor dice from my opponent at critical moments didn't help and the Austrians swept to victory.

Enjoyed the game and the rules appear to work well. A picture of the statue of Gabor below from my recent trip to Budapest. 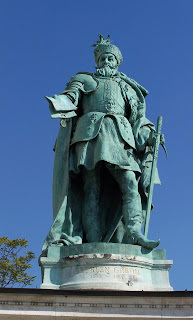 Posted by Balkandave at 23:14 No comments:

A bit more historical fiction in line with my current Viking/Lord of the Isles project. A new author for me is Giles Kristian and the first of his Viking trilogy, Raven: Blood Eye.

The historical setting is the early Viking raids on Wessex. Longships raid a village and our lead character ends up with the Norse warriors. They then get involved in a raid on Mercia on behalf of a Wessex Ealdorman, with a sub plot involving a sortie over Offa's Dyke into Wales.

This is classic historical fiction. Plenty of violent action and treachery as you would expect from a Viking band, together with a pacy narrative. Very similar style to Robert Low. Looking forward to the next installment that is to be set in France.
Posted by Balkandave at 21:17 No comments:

Just got back from a trip to the Hungarian capital Budapest.

Lovely city for a short break. The mighty Danube separates Buda with its castle district from the much flatter Pest with its fine buildings and museums.

All the details of what to see can be viewed on the Balkan History website.

Highlights include the Military History Museum with its collection of uniforms, paintings and equipment. It is housed in former barracks in the far corner of the castle district. The National Museum in central Pest is much stronger on the earlier periods with good collections of arms and armour. Both museums have plenty of English translations and small but useful shops that sell good value booklets.

Other sights include Gellert Hill named after the unfortunate Bishop, who got rolled down the hill that dominates the city, in a barrel of nails. The Citadel on top houses a small museum of the WW2 battle for the city. Finally don't miss the Heroes' Square with its monuments to the nation's major historical figures.

In the evening I would recommend the stunning 19th Century cafe/restaurants with their tasty traditional cusine and full bodied Hungarian wines. 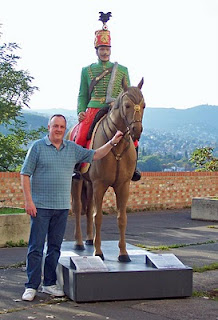 Me and the inevitable Hussar outside the military museum.
Posted by Balkandave at 22:02 No comments:

Finished a bit more background reading for the Lord of the Isles project. First off as always I turn to Nigel Tranter and his fictional account of Somerled the Mighty. Great historical fiction that attempts to keep close to the historical sources. This is one of his best and must be at least my third re-read of this.

For those not familiar with the story, Somerled inherited his father's thanedom in Argyll in the 12th Century. He cleared it and much of the Hebrides of Viking occupation and raiding, establishing a powerful state on Scotland's western seaboard. Many of the classic castles that you can see today on this coast were built by Somerled. He was assassinated before the Battle of Inchinnan 1164 and his Kingdom was split between his three sons. The current Prince of Wales retains the title of Lord of the Isles.

For background reading I have also finished 'Kingship and Unity - Scotland 1000-1306' by G.W.S Barrow. More of a social and economic history this but useful for a broader understanding of the period.
Posted by Balkandave at 11:17 No comments: