These figures are for our Claymore demo, Raid on Tito. They will be Tito and his bodyguard. However, they will make an appearance at Wappinshaw this weekend as Soviet advisors to the Red Clydesiders in our Battle of Glasgow Green VBCW game. Wappinshaw is at a new venue, the Kelvin Hall in Glasgow. It's a good size venue and should be a good show. Hope to see you there. 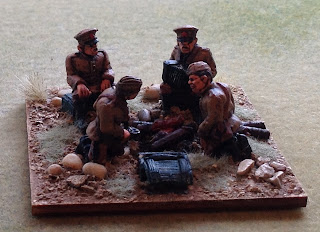 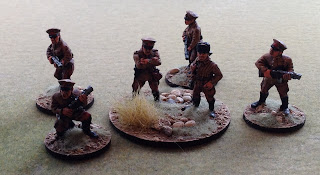 We made the journey down to Sheffield over the weekend for two days at the Triples show. My first time at the new venue. Plenty of space in a nice light sports hall. We stayed at the Garrison Hotel that is converted from the old barracks. Highly recommended.

Not having to work a display game meant I had time to really go around the stalls and view the display games. There was a good balance of both. Picked up a number of books for current projects and a few others beside. Then lots of bits and pieces - paint, glues and several cans of Testors Dullcote. The only surprise when I got home was very few figures. Probably best given the current lead pile!

These are the games that caught my eye. 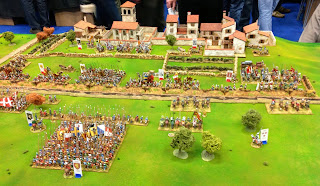 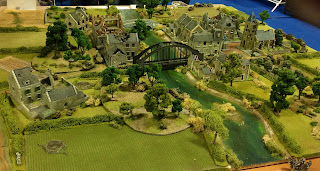 The scenery was well done in this FoW game 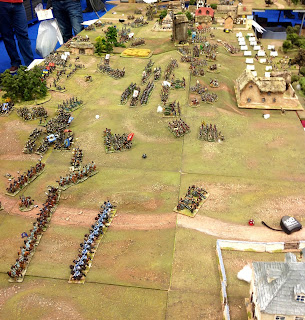 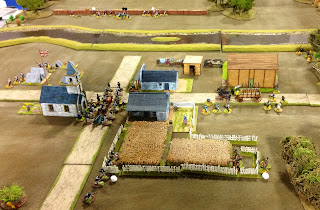 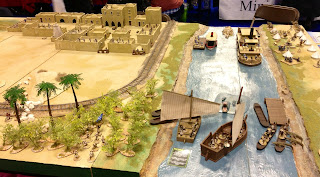 Gunboats on the Nile

Posted by Balkandave at 22:37 No comments:

It was the Falkirk  Carronade show yesterday. Fine venue for a big show feel. What I really like is the large amount of games being played. Plenty of trade, but it feels more like a wargames show than a trade fair that some other shows have become. It looked busy as well.

My purchases were fairly modest. Some Perry Desert Rats that I will use for my Malaya project. Plus some Warlord Japanese guns for the same project. The latest Black Powder supplement 'Albion Triumphant' and the Soviet Bolt Action supplement. Plus a very nice King John, in case I get around to doing the forgotten invasion. Plus bases and some more foam inserts, oh and the complusory visit to Last Valley of course. Club outing to Triples next weekend so much more time to peruse the stalls.

Our own game was Muret 1213, that came together very well after some last minute revisions on the Friday night. The refight went as per the historical battle. Even King Peter nearly got killed, or would have, had I thrown 10+ rather than a 9. 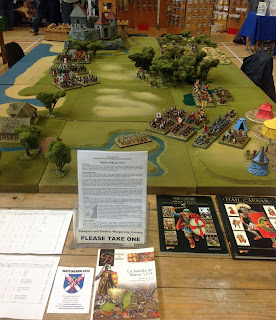 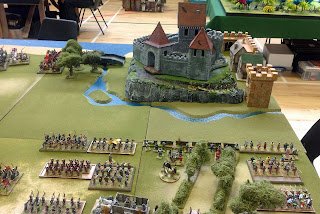 Running a display game means time is limited for looking at the rest of the show, but here's a selection of what caught my eye. 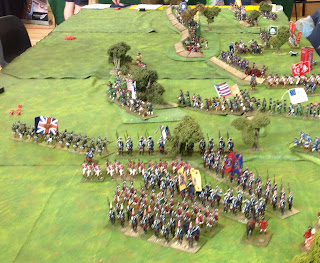 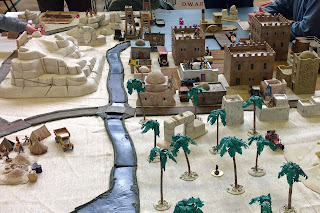 Eyecatching, but can't remember what it is! 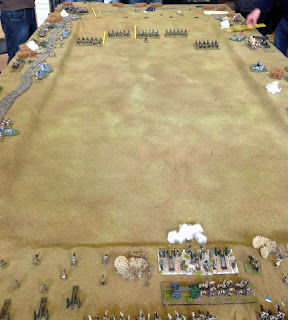 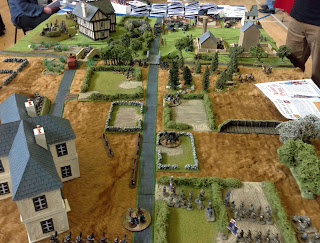 Simon and the Dumfries club with VBCW

Nachod 1866. Very nice scenery and even though the 10mm figures look a bit lost, you get a real feel for the battle. 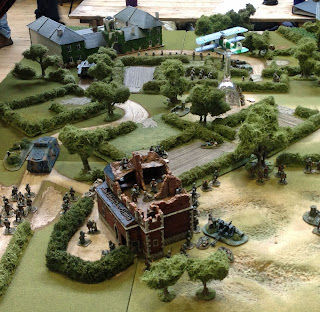 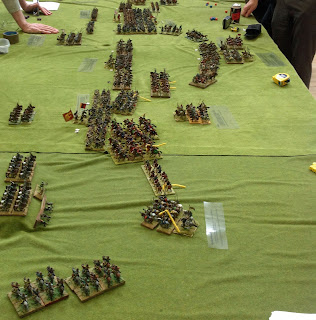 Chalons, big battlefield, lots of figures as you expect from Phoenix 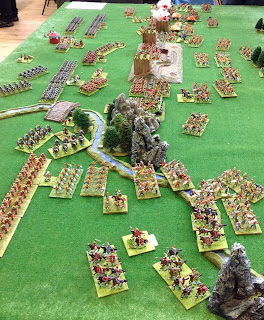 On the Antonine Wall. Mostly Prince August molds that took me back!

We did a cut down version of our Wappinshaw display game, Glasgow Green 1938, at the club on Sunday. Waves of Government forces attacking the frame of what is shaping up to be a very good model of The People's Palace.

The Communist units holding the sandbag emplacements were wiped out, but the workers militia in the building just about hung on. A few tweaks to the Bolt Action rules plus some new event cards, and we should have a very good game. 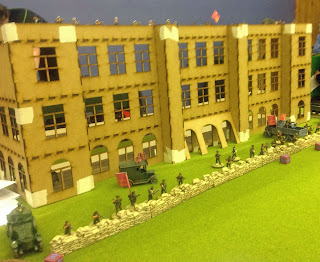 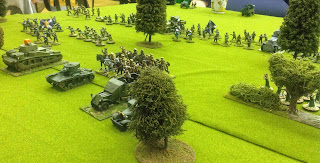 Posted by Balkandave at 07:21 No comments:


My background reading for our display game at Carronade next week took me to Sean McGlynn's book, 'Blood Cries Afar'. This covers the French invasion of England in 1216.

Now, other than a few raids and aborted efforts, I had no idea that there was such a French invasion in 1216, or that it very nearly succeeded. I suspect I am not alone, hence the sub-title 'The Forgotten Invasion of England 1216'.

King John was on the throne and after losing Normandy and other French territory, the Angevin Empire was very much on the defensive. Capetian France ruled by Philip Augustus was on a roll, particularly after the Battle of Bouvines in 2014. The English barons were yet again in revolt against John, despite Magna Carta in 2015. They controlled London and invited Philip's son Louis, who had a tenuous claim to the crown, over as King. They controlled London, so facilitating  the invasion.

John pursued a battle avoiding strategy holding key royal castles, but was gradually being forced out of southern England, with the exception of the key castle at Dover, that held out. Then John dies of an illness and bizarrely that was the turnaround for the Angevin fortunes. His son Henry was only a child, but the Regent rallied and took advantage of splits between the rebel barons and the French. The royalists won the Battle of Lincoln in 1217 and a naval battle off Sandwich that dispersed a relief fleet. Louis sued for peace and left for France.

The book is a good narrative history of the campaigns that led up to the invasion and the campaigns in England. The military strategy of the period is also covered in depth. Well worth a read and a campaign I will certainly return to.

It also helped my understanding of the context for our display game, Muret 1213. The production line of knights continues. Not as many as I had hoped to do, work keeps getting in the way, but probably enough after a few late nights this week. These are the latest additions. 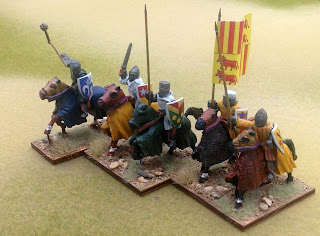