Unlike my last review of The Berlin-Baghdad Express my latest read Engines of War by Christian Wolmar is a proper blend of railways and military history. The author is a prolific writer and broadcaster on railways and that is his real focus with this study.

He shows how railways transformed the nature of war in the 19th Century with chapters covering the main conflicts of the period. The railways enabled large armies to be transported considerable distances and equally importantly, suppliedthem to the level modern weaponry required.
For a period of about 100 years from the Crimean War to the Korean War, trains and railways were inseparable from war. Whilst railways have generally been a force for good, we also have to remember that without them industrial scale carnage would equally have been impossible.
I had previously read John Westwood's Railways at War and this author pays tribute to that book. However, this is a better organised and more readable study of an aspect of military history that has received little attention. Recommended.

Posted by Balkandave at 22:30 No comments:

A few skirmishers for the early feudal Scots. I know the early tartan is unproven, but the odd figure makes it look like a Scots army.

These lads are from the Gripping Beast range. 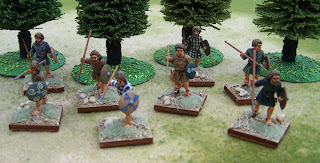 Posted by Balkandave at 12:03 No comments: