Nigel Tranter was perhaps best known for his deeply researched novels on Scottish history. He also wrote non-fiction books, including a fine short history of Scotland and a five-volume study of Scottish castles, 663 fortified buildings in total. Less well known were are his westerns, written under the name Nye Tredgold and 12 children's books. 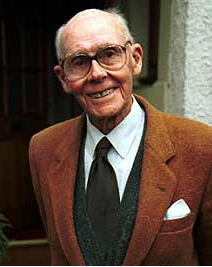 Nigel Tranter was born in 1909 and trained as an accountant. He served in the Royal Artillery during WW2. After the war, he was involved in the original Scottish Convention, which campaigned for Scottish Devolution. He died in January 2000, aged 90, less than a year after the devolved Scottish Parliament was reconstituted. I met him once when I was working at a political party conference. I didn't recognise him, and when introduced, I was the gushing fanboy! He told me he wrote his books by hand often while walking near his home in East Lothian. We shared the view that to really understand history, you have to walk the places where the action happened.

His 57 novels covered many aspects of Scottish history, from the 6th to the 18th century. He told me his favourite period was the 16th century, and that is reflected in his output. Some academics were a bit sniffy about his work, but I would argue they opened up the subject for many people. He always emphasised that they are works of fiction, although based on historical research. This is more obvious in his later books as his study of Scottish history advanced.
So, I have sorted my collection of his novels into roughly chronological order on the shelf. I think I have most of them and intend to reread them all. I will share my thoughts and the wargames they inspire on the blog with links below. I hope you enjoy them as much as I have.
Nigel Tranter - Scotland's Storyteller - his biography written by Ray Bradfield.
A useful book to have beside you when reading his novels is 'Tranter's Terrain' by Michael and Alison Pritchard. It's a slim volume written in 1994 that covers the terrain (places, castles, topography) he mentions, broken down by region.
Druid Sacrifice - 6th century Scotland in the Age of Arthur, well maybe!
Columba - The story of St Columba, who was the driving force behind the spread of Christianity in Scotland during the later 6th century.
Kenneth - The first King of Scots. Tranter's take on Kenneth's 9th-century unification of the different kingdoms is probably a good deal more peaceable than the likely history. Nonetheless, there is plenty of action to keep the reader's attention.
High Kings and Vikings - Late 10th century and early 11th century Scotland. High Kings come and go, often meeting a violent end. Meanwhile, the kingdom is threatened by Vikings and Saxons.
Macbeth - Tranter's take on the 11th century King of Scots. A sympathetic treatment of the historical figure, closer to the facts than Shakespeare, but a few liberties nonetheless.
Margaret the Queen - This covers the reign of Malcolm III (1058-1093) and his Saxon Queen Margaret who expanded the Roman Catholic Church in Scotland. His reign was mostly focused on the conflict with the new rulers of England, the Normans.
David The Prince - Tranter sympathetically deals with David I, the great reforming King, who with Anglo-Norman cash and swords brought Scotland into the feudal system.
Lord of the Isles - One of my favourites. The amazing 12C story of Somerled, who built a seaborne domain on the west coast of Scotland.
Crusader - The title is a bit misleading as this is the story of Alexander III's regency. Not one of Tranter's more gripping tales.
Envoy Extraordinary - Another title based on Alexander III's period, although, unlike Crusader, this takes the story on to his adult rule.
True Thomas - The life of Sir Thomas Learmonth of Ercildoune, also known as Thomas the Rhymer.
The Wallace - we reach that most iconic of Scottish heroes. Even if the facts of his life are a bit sketchy.