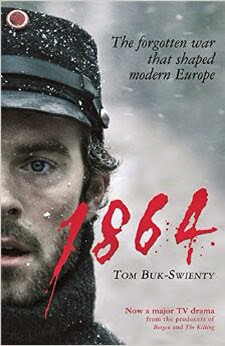 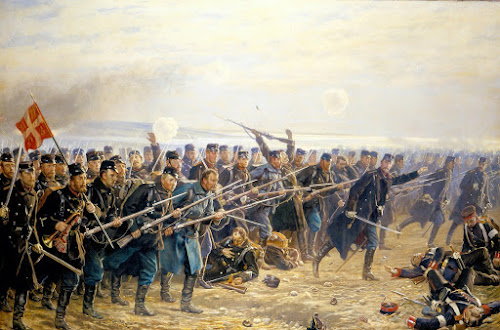 Posted by Balkandave at 22:54 No comments:

Chris's rules are always worth a look, going back to Warring Empires, the mechanisms of which were expanded into Principles of War, which I used to play a lot of.

The title is apt because this is firmly aimed at the big battles. A unit is a brigade or division of 3 or 4 bases, which means you can play the biggest battles of the period on a normal tabletop. A day is typically three turns, although that can include four rounds of firing but only one, albeit generous, movement per side. It means you need to think out your plan carefully, particularly as the random element means your troops might not move at all.

Firing is typical of the author's previous rules with factors and a table for outcomes. Similarly for assaults. They are pretty straightforward, with no need for micro managing units at this scale. A game is easily playable in an evening.

There are scenarios in the main rule book for the Franco-Prussian War and there is a separate booklet of scenarios for other 19C campaigns. These are well set out and means you can quickly get units onto the table.

Chris did send me a draft of a Balkan War scenario. Sadly, some building work in the house means my table is currently occupied, so I could only try them out on a reduced size game. It was Bulgarian v Turk with a couple of Corps on the Turkish side, defending against a four division Bulgarian army. My 15mm Balkan War armies are based for Spearhead and that works fine for these rules.

This is move one, which didn't go quite as the Bulgars planned. Their game plan was to pin the Turks in the fortifications and go for the high ground. However, most divisions moved slower than planned.

Move two went well on the right, with a Bulgarian division pushing the Turks off the hill, but slower in the centre, with the supporting division stopping. 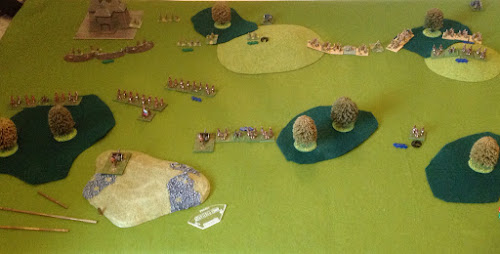 The final move of the first day saw the Bulgars capture the hill in the centre as well. Although at some cost.

The rules then cover night actions, which in the main are an opportunity to regroup. In this case the Turks would have called it a day, or rather night, and pulled back.

I enjoyed these rules and will certainly play more of them. I'll still use Black Powder for the tactical games, but these do exactly what it says on the tin.