The other half of my holiday fiction reading has been 'Eagle' by Jack Hight. This is the first of a trilogy about Saladin. Arguably one of greatest commanders the Middle East has seen.

This first volume starts from his childhood and covers his training and early life. His appointment as an Emir of a border garrison and his rise to fame in the service of Nur ad-Din, Sultan of Syria. This part of the story ends with Nur ad-Din's defeat by Baldwin of Jerusalem at Buthaia.

The author keeps fairly close to what little we know about Saladin's early life and the events of the period. The major variation is the insertion of a Saxon, John, who is captured at Damascus. He becomes Saladin's slave and then commander of his personal guard after saving his life.

Jack Hight is an excellent writer of historical fiction. I raved about his first book, Siege, based on the siege of Constantinople and this is just as good. Recommended.
Posted by Balkandave at 21:32 No comments:

My summer holiday reading included Robert Low's 'The Lion at Bay'. This is the second in the Kingdom series covering the Scottish wars of independence.
This volume covers the demise of Wallace, the murder of Comyn and the crowning of Bruce. It ends rather strangely by only briefly covering the wilderness period, no spider and the rest here.

As the author has pointed out many times the historical sources are limited. So a writer of historical fiction is entitled to make his or her own judgements. Low gives Bruce the benefit of the doubt over the death of Comyn, but implicates him in the betrayal of Wallace. Right on both counts in my view, but wont be popular with some.

The narrative rattles along as Bob Low is a great story teller. There is a gritty style to these books with a great period feel. You get a real feel for the period, warts and all. Although he has toned down the Scots language, presumably in response to criticism of the first volume. There is a useful glossary of the more obscure terms.

An excellent read, highly recommended.
Posted by Balkandave at 21:51 No comments:

Another gap in our Spanish armies for the display game for Claymore is some military order knights. They formed part of the decisive final charge at the Battle of Las Navas de Tolosa, so we had to have a unit. Sadly, our extensive collection of knights didn't run to the Spanish orders. So back to the Beast for suitable figures and we selected the Knights of Santiago. There are some nice shield decals for this range and our resident flag man Iain from Flags of War is working on the banners. The brushwork is again from Andy McGeary.

The Knights of Santiago were formed sometime before 1164 when they were given the frontier town of Ucles. The Pope recognised the order in 1175. They were a more relaxed order in that knights were allowed to marry and hold personal possessions.

They quickly became the major military order in Spain with some 1000 lances in 83 commandaries. They also had lands in Palestine, France, Hungary and England. They fought in most of the actions that constituted the reconquest of Spain from the Moors. They still exist to this day, under the control of the crown, based in the monastery at Ucles.

My focus is now shifting to the Claymore show on 4 August. The GDWS display game this year will be the Battle of Las Navas de Tolosa 1212.

Why you may well ask? Well, I like an anniversary theme for display games and El Cid is one of my favourite films of all time. Sophia Loren looking magnificent has nothing to do with it of course! This is somewhat later than the classic El Cid period, but not a lot had changed.

This is the 800th anniversary of the battle, known in Arab history as the Battle of Al-Uqab. It took place on 16 July 1212 and was a key turning point in the re-conquest of medieval Spain from the Moors. The Spanish forces were led by King Alfonso VIII of Castile joined by the armies of Sancho VII of Navarre, Pedro II of Aragon and crusaders from across western Europe. The Caliph al-Nasir led the Almohad army, made up of troops from the whole Almohad Empire and the Iberian Peninsula.

The army lists are nearly finished. A balance of the figures we own and, as usual in a medieval battle, limited sources. We should have around 6000pts a side for WAB, that's over 600 28mm figures. The handout is written and will be up on the GDWS website soon.

I have a few more figures to paint, it needs a lot of Berber spearmen! However, Andy McGeary's paint brush came to the rescue with additional units that give a real period feel for the game. I just finished basing them this morning.

First we have some Spanish infantry. These are well equipped and organised so they will probably stand as a guard unit in the army lists. They are from the Crusader El Cid range. 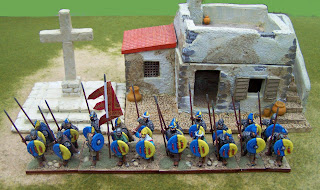 Then Spanish light horse or Jinetes. Again from the Crusader range. 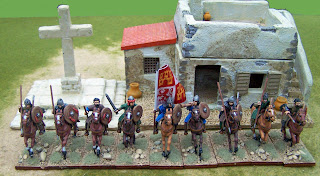 And finally a unit of Spanish knights that I picked up on EBay. 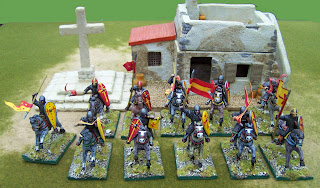 The building and cross are Grand Manner. 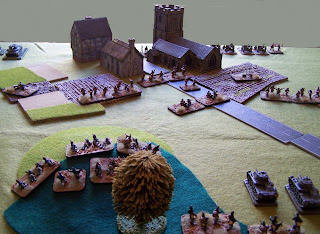 In January I posted a review of Andy Johnson's first book 'Seelowe Nord'. This is a fictional account of the German invasion of Britain in 1940. The difference is that the author treats the landings in Kent as a diversion for the main effort on the Yorkshire coast.
I thought this was a brilliant book in itself, but it also makes a different early WW2 scenario.

I had most of the British with the addition of the Home Guard, and as my recent postings show, I have been busy with the Germans. The first tabletop outing was completed today, the Battle of Rushton Parva.

The battlefield has the village in the centre with a bunker defending the road. Hills on the left and a stream and woods on the right. A decent, but not overly strong defensive position as the British forces only have time for a hasty defence. 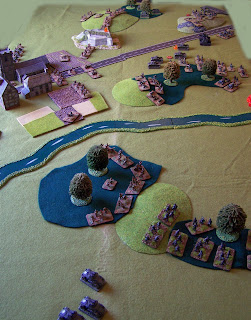 The German plan was to pin the centre with tanks supported by infantry. Then envelop both flanks with infantry platoons supported by SPGs and armoured cars.

The attack in the centre started well with a well aimed shot destroying the bunker. But after that HMG and rifle fire cut up the supporting infantry and the Panzer II's are no match for the Matilda.

The attack on the right destroyed the carriers and captured the wood, but an assault was pushed back. 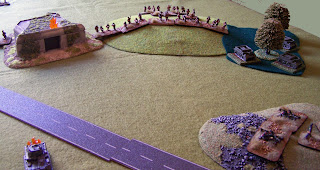 The infantry on the left succeeded in pushing the Home Guard out of the big wood. However, by this time the Brits were able to reinforce the stream defence line and there was no chance of a breakthrough into the village.

The game was played using Flames of War rules and the Blitzkrieg supplement. 1500pts a side. Enjoyable game, with plenty of other scenarios suggested by the book that I highly recommend.

Posted by Balkandave at 21:24 No comments:

Gebirgsjager in the Balkans

On a related theme I received some review samples of the latest releases in the Rif Raf Miniatures range of 28mm WW2 Greek figures. I am particularly excited about the mountain gun that looks excellent. They have also released a 15mm range, just in time to do battle with the Gebirgsjager on the Metaxas Line. I suspect they will get some brush treatment first.
Posted by Balkandave at 22:13 No comments:


More Gebirgsjager off the production line. Just about there with this project, certainly enough to field a 1500pt Flames of War company.

First we have the remaining infantry platoons numbers 2 and 3.

Then we some light mortars, integral to the platoons.

Then the infantry guns. 75mm

and finally the pioner platoon

I have a few odds and sods left to base. Plus I need some AA and mountain artillery to finalise.

These are all Battlefront products. As I have said before assembly can be a bit fiddly, although that wasn't an issue here. The detail and animation are very good. One small point I don't like is the thickness of the bases.

Posted by Balkandave at 23:00 No comments:

This time we have the pioneer platoon. 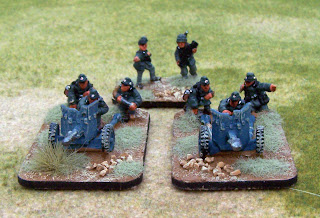 Posted by Balkandave at 20:13 No comments:

San Martin is best known as the commander of the Army of the Andes that crossed that mountain range, defeated the Spanish Royalist armies and liberated Chile. He then went on to liberate at least part of the Royalist stronghold of Peru before he met up with the northern Liberator Simon Bolivar, the subject of Lynch's previous book. He effectively retired from the liberation struggle and retired to France. His house in Bolougne is a museum to him today.

San Martin was a complex individual. He learned his military trade in the Peninsular War in Spain before returning to Argentina, the place of his birth. While he was a key player in the liberation of the Spanish colonies in South America, he was a conservative and a royalist politically.

This is a biography of the man rather than a military history. But a well written study that puts the campaigns into context. His military achievements reflect his considerable leadership skills.

I took an interest in San Martin a few years ago when we took his Andes campaign as a theme for a series of demonstration games in 2007. I built his Army of the Andes and his Royalist opponents in 28mm scale, mostly by simple conversions from other ranges. Details and pictures are on my web site and details of the demo games on the GDWS site. I dusted them down a year or so ago to play using Black Powder rules and they worked very well.

There is now a range of figures in 15mm by Grenadier Productions run by a real enthusiast for the period, John Fletcher, who has also written an excellent guide to the campaign. There is a good Liberators Yahoo group as well.

A few photies from my collection. 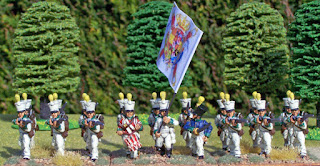 Posted by Balkandave at 20:06 No comments:

The first Gebirgsjager infantry platoon off the bench.

Followed by a Mortar platoon for close support

Working on the Pioneer platoons next with some ATGs.
Posted by Balkandave at 13:58 No comments: