100th anniversary of the Sarajevo assassination

Today is the 100th anniversary of the assassination of the Archduke Franz Ferdinand and his wife Sophie in Sarajevo on 28 June 1914.  They were shot at 10:45 am, by the nineteen year old Gavrilo Princip, a member of the group Young Bosnia and one of a group of assassins organised by the Serbian Black Hand. This particular Balkan assassination led to a chain of events that eventually triggered World War I.

The events of that day and the subsequent drift to war have been well documented. What the anniversary has done is to put some focus on the personalities, who have otherwise been largely forgotten.

This week’s New Statesman has good piece on Franz Ferdinand by Simon Winder. This reminds us that he was one of the most important figures in Central Europe at the time. He was of the same generation as the Tsar and Kaiser, however, his father Franz Joseph survived much longer than anyone expected. Franz Ferdinand, unlike his father, insisted that war would be a disaster for Austria-Hungary and bitterly argued his case against the incompetent Austrian Chief of Staff, Conrad von Hotzendorf. The other irony is that he was something of a reformer and opposed Austria’s occupation of Bosnia – the eventual cause behind his death at the hands of Princip.

The assassin, Gavrilo Princip has received even less attention over the years. He was a Bosnian Serb, brought up in a poor village, who became radicalised after a secondary education in Sarajevo. Tim Butcher has written a book ‘The Trigger: Hunting the Assassin Who Brought the World to War’, that for the first time looks at Princip and what motivated him. He puts an emphasis on his Bosnian roots rather than his Serbian links. While this may be true, he wouldn’t have been in any position to carry out the attack without the support of Serbia, through the Black Hand.

As Butcher says, the Archduke was shot “through a series of strokes of serendipity and fortune. It was the rest of the world’s bad luck that his actions triggered the first global conflict.”

The site of the shooting has changed little since 1914 and there is a small museum nearby that is worth a visit. 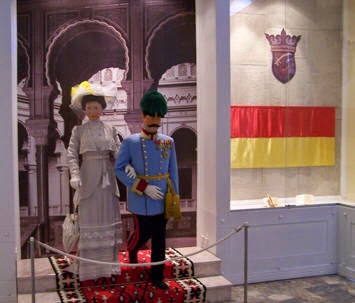 Posted by Balkandave at 13:39 No comments:

This is the QRF model. The casting is a bit rough in places and needed a fair amount of cleaning up. I would recommend making some notches for the wheels before glueing as the whole model rests on them. Overall not a bad model. 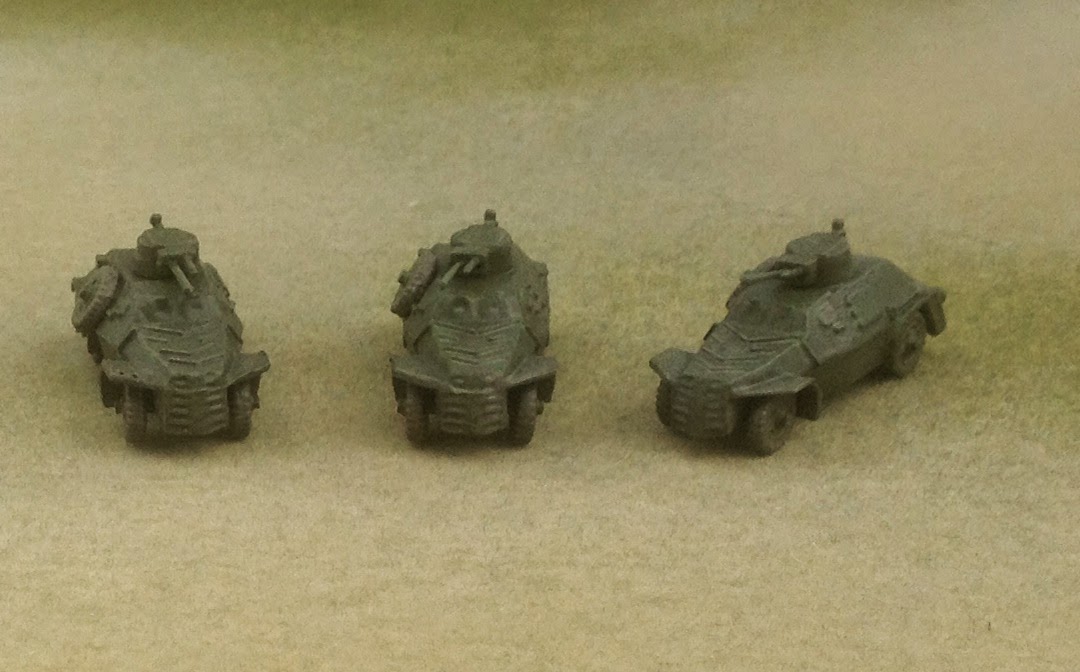 Then we have a 2pdr ATG in 28mm to give the British something to hold back the Japanese tanks storming through Malaya.

This is the Warlord model that I bought before the Perry version came out. The usual absence of instructions is a nuisance, although via the forum there are now several pictures that make the job a lot easier. My main complaint is the absence of location lugs, particularly for the gun shield and the gun barrel. The model was obviously designed by someone who didn't give any thought to putting it together. both parts balance precariously with little support and simply isn't good enough for a wargame model that will inevitably face some rough handling on the tabletop. 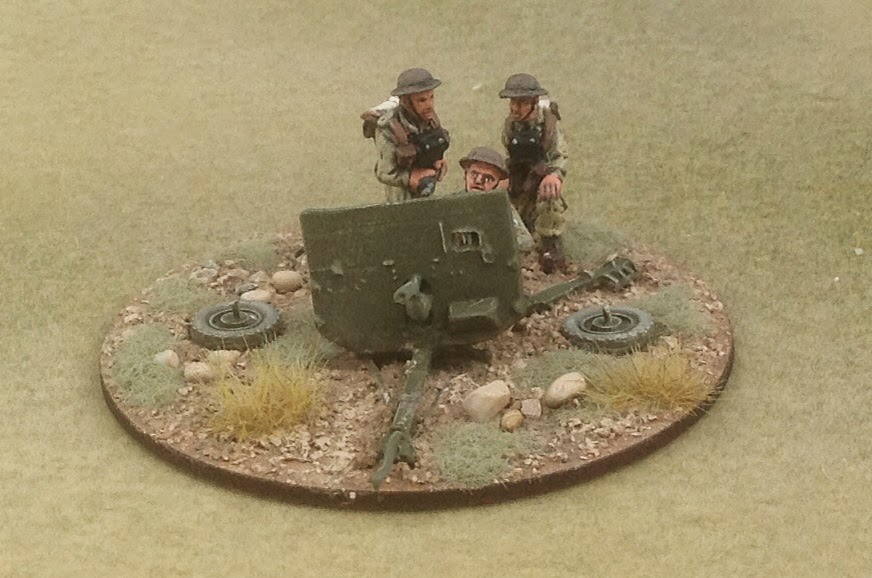 Posted by Balkandave at 15:09 No comments:

The British and Vis

Vis is an island in the Adriatic, part of modern day Croatia, that has a number of interesting connections with Britain. The first of these is covered in Malcolm Scott Hardy's book, 'The British and Vis: War in the Adriatic 1805-15'. 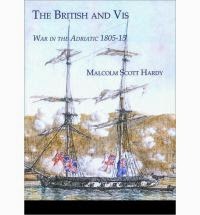 The British occupied and then fortified Vis (then known as Lissa) as a strategic base for their modest naval presence in the Adriatic. The aim was to interdict the French presence in Dalmatia; disrupt their trade; maintain communications with allies and prevent the French from acquiring shipbuilding capacity. Vis was well placed for this and had the added advantage of being relatively easy to fortify due to limited landing places, sheltered harbours and fresh water.

Despite these advantages there was considerable opposition to the expense of fortifying and garrisoning the island. This book covers the progress of that debate and arguably the island wasn't properly fortified until after any French threat to the island had receded. The locals were quite happy to be occupied and even formed their own militia unit. The advantages were mainly economic, with Vis being used as a base for smuggling and piracy.

The Garrison under the command of Colonel Robertson arrived in April 1812. The core was formed from the 35th Foot, with elements of the Royal Corsican Rangers and Swiss troops from De Roll's Regiment. Gun boats provided close naval support and a frigate squadron also protected the island.

Hardy provides a detailed account of the development of British involvement and life on the island for the garrison. Perhaps surprisingly, he provides only a passing reference to the British naval victory off the island in March 1811.

The British presence is easily recognisable today with the fortifications and the cricket pitch! I am spending my summer holidays on the island next month, so more on that later.

The British returned to the island in the Second World War. It was a commando, naval and air base in support  of the partisans. This is well covered in Michael McConville's book, 'A Small War in the Balkans'.
Posted by Balkandave at 12:10 No comments:

Better weather means I am more attracted to the golf course than the painting table, but still time to tidy up some loose ends.

First up is the latest offering from Burns Miniatures in their 15mm Greek WW2 range. These are the HMG crews. I did groan when I saw the two part guns, but the lugs fit very well and its worth it for the amazing detail on the gun barrels.

Then some Bolt Action 28mm Italian armour from the Warlord range. An M13/40 tank and the Autoblinda AB41 armoured car. The parts fit together well and the absence of instructions, a Warlord problem, isn't a difficulty with these very nice models. My only complaint, not for the first time, is the lugs for the gun barrels. A tiny wee hole is totally inadequate for holding a gun barrel, even fairly small ones. The obvious solution is to mould the mantlet and barrel together, with a a deep lug to slot it in.

Posted by Balkandave at 10:57 No comments:

More tidying up projects post-Bannockburn, although on that point BBC2 tonight has the first of a two part documentary on a new archeological study. Looks good and it appears, according to today's Herald, that they are confirming the Carse of Balquhiderock as the battle site.

My WW2 Italians were a little short on heavy weapons - so here we have medium and light mortars, ATG, HMG and a command group. I have a couple of armoured vehicles I bought from Warlord at Carronade and that will finish the project off. 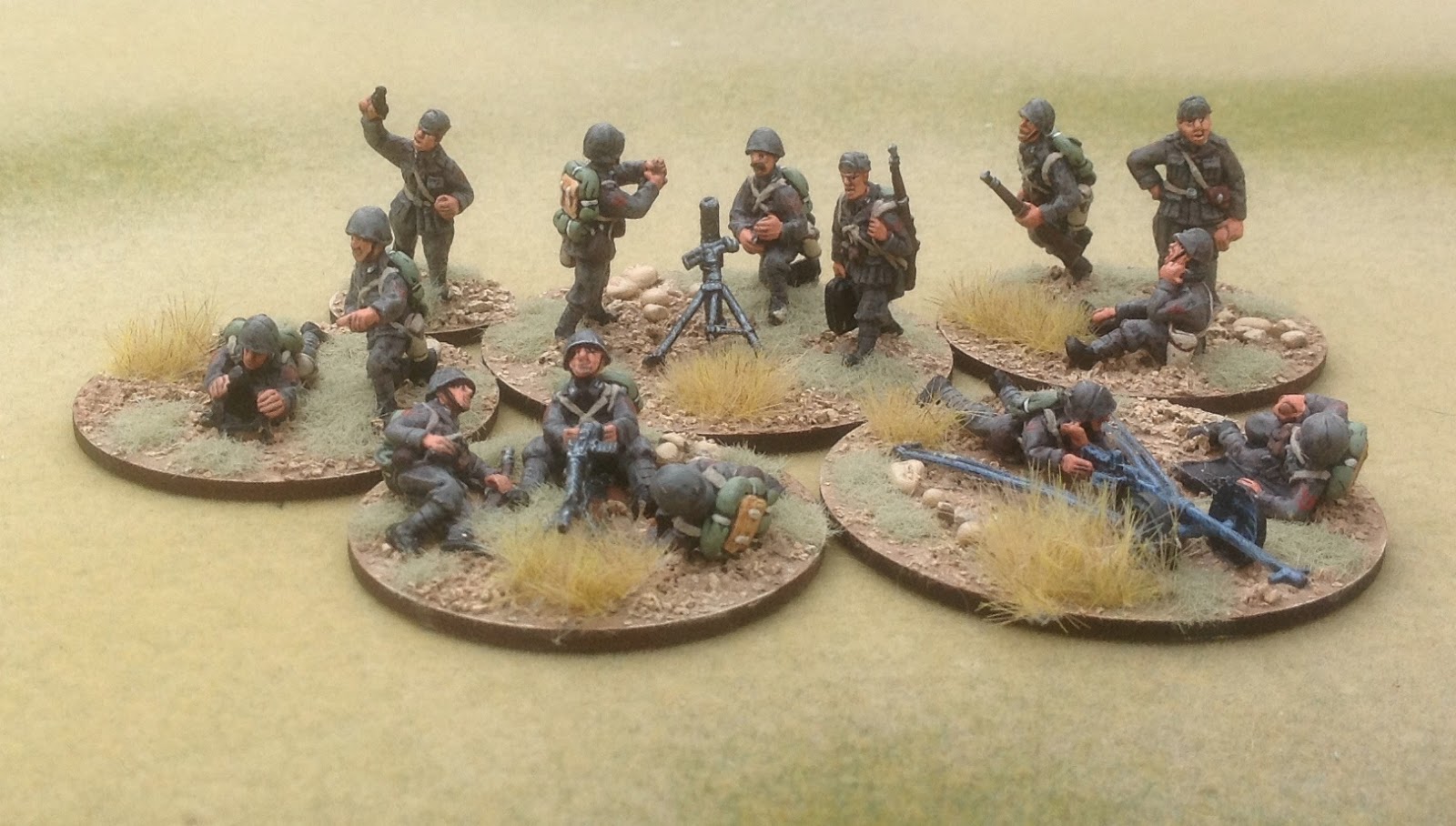 Sort of related reading has been the new Osprey on the Spanish Civil War. The first volume is on the Nationalists and their fascist allies. Usual format with a focus on organisation and weapons rather than campaigns. I have the original Osprey MAA74 on the SCW, now looking a bit dated, so this is very welcome. 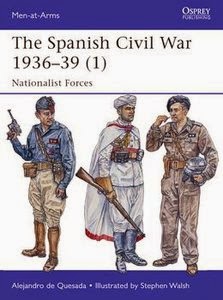 Posted by Balkandave at 17:48 No comments: 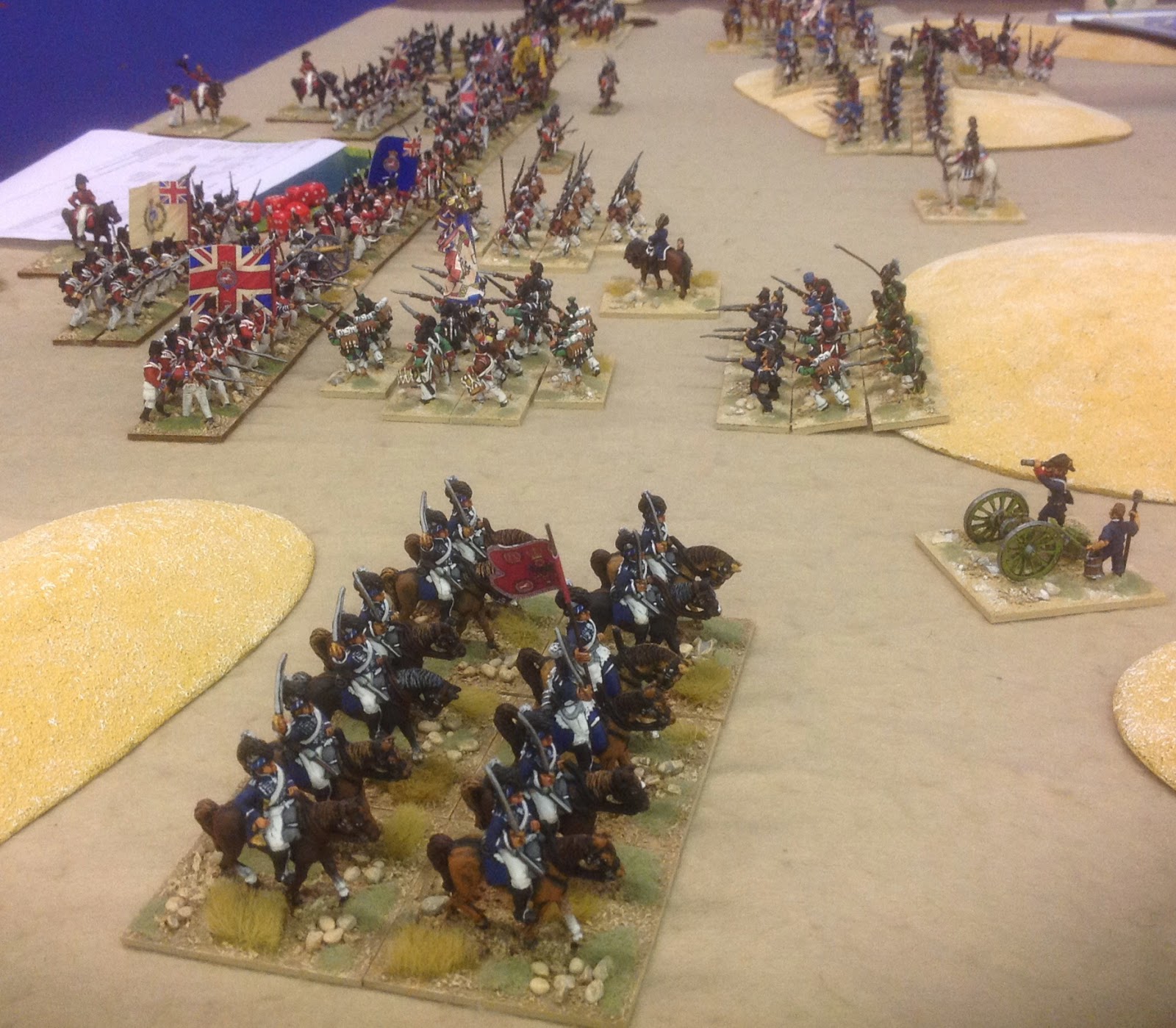 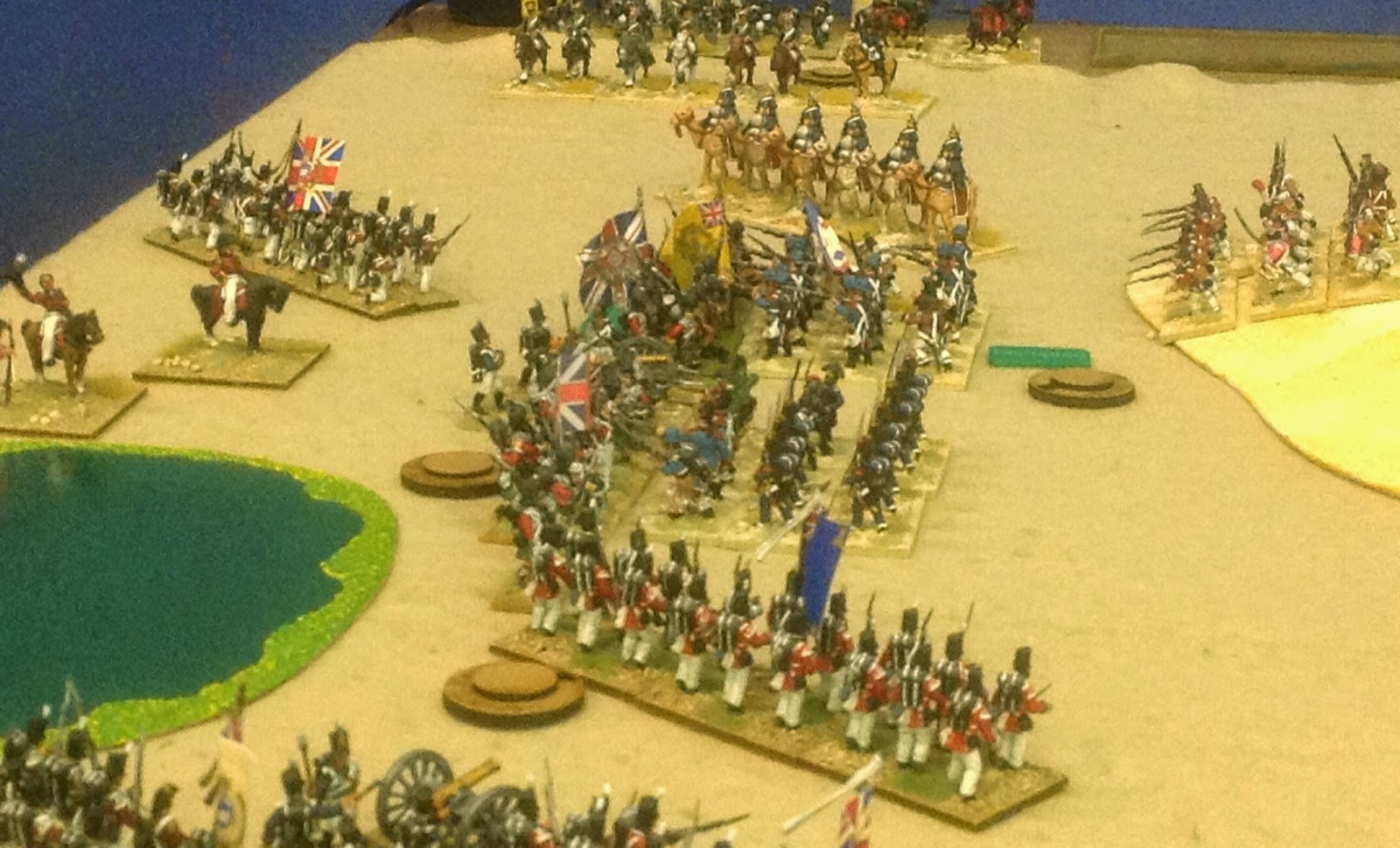