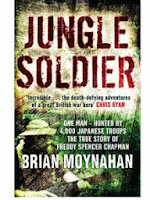 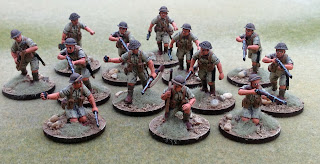 Posted by Balkandave at 21:54 No comments:

My Far East project has taken a bit of a detour into the Sino-Japanese conflict, which of course began before WW2. My latest reading is Rana Mitter's 'China's War with Japan', a book I discovered through a History Magazine Extra podcast. I can recommend these if you haven't tried them yet. 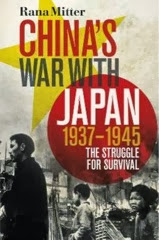 China's contribution to the defeat of Japan in WW2 is probably not fully appreciated, at least in the West. China continued fighting for eight years when it could have surrendered. They tied down half a million Japanese troops that could have been deployed elsewhere in the Pacific, most notably in an invasion of India. China paid a heavy price, with some 14 to 20 million dead.
This is a broad narrative history that takes us from the, almost accidental, outbreak of war in 1937 to the unexpected capitulation in 1945. It is a complex tale that focuses on the political history of the period because in practice there were three China's at play. The Nationalists, communists and the collaborationist governments. The outside actors, most notably the Americans and Russians, play an important role as well.
The military historian will be frustrated by the way the author brushes over the detail of major campaigns. However, the political context is important here, more so than many other campaigns, so this is definitely required reading.
Posted by Balkandave at 10:47 No comments:

The latest additions to my Bolt Action 28mm Balkan WW2 project are the Handschar. Or properly, the 13th Waffen Mountain Division of the SS Handschar (1st Croatian).
This was a Waffen SS unit recruited mostly from Bosnian Muslims. They joined up primarily to secure their communities from the depredations of the Croatian Ustashi. By 1943 over 100,000 Bosnian Muslims had been killed and 250,000 had become refugees. Himmler had a somewhat romantic view of Islam and the fighting reputation of Bosnians, based on their record in WW1. The Bosnians had a generally positive view of the Austro-Hungarian Empire, which meant they were inclined to welcome the Germans.
They spent most of the war fighting Tito's partisans in a series of operations that had limited success. As the Russians poured through the Balkans they mostly drifted home. Those who stayed to the bitter end either died in action or were executed for war crimes. Not a happy story, but they are an important and distinctive unit in partisan warfare of the period.
The models are Warlord Germans with Handschar heads that be bought separately. There are plenty of pictures of these troops in George Lepre's 1997 book, 'Himmler's Bosnian Division: The Waffen-SS Handschar Division 1943–1945'. Plus the Osprey titles on the period.

I played my first game of Muskets and Tomahawks today at the club. A dry run for the club display game at the Targe show next weekend at Kirriemuir.
For those not familiar with these rules they are for skirmish games in the French Indian Wars or the AWI period. Each side has a number of small 6 to 10 figure units with officers that are useful for morale purposes. Activation is by cards for different types of unit together with event cards that add the unexpected, without dominating the game. Shooting and combat is a simple D6 system and the rules are quickly picked up after a couple of turns.
While I have no intention of returning to this period, I can see an option to use them on the Military Border in Croatia during the 18th Century. The small war skirmishing was very similar with irregulars supported by regular troops based in the main garrisons. It will probably need different cards but otherwise looks like an interesting option.
Here are a few photies of the game today as a taster for those attending Targe. Sadly not me as work intervenes. 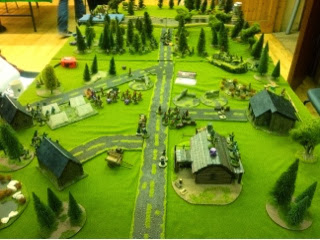 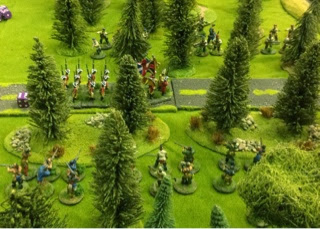 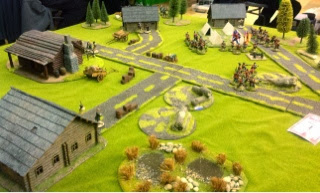