Some more 28mm WW2 Greeks off the production line for Bolt Action. Another platoon of infantry supported by a heavy machine gun. Still got a mountain gun to finish and then I need to look at some bren carriers and other support weapons.

These figures are from the Burns Miniatures range.

We have also had a major refurbishment in the study and I have a new painting table. This just might inspire me to tackle the ever growing lead mountain - but then again...

The trade off domestically was no piles of untidy paint pots, so I have invested in these really nice paint pot holders from Battle Flag. They are made of mdf and come as kits that fit together really well. Different sizes for different makes of paint. 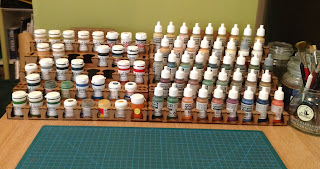 MDF kits for buildings are really taking off at present and was sorely tempted at Triples. My only reservation is the lack of depth and texture that you get with resin. Apart from the small matter that I could build several cities with the buildings I already have!
Posted by Balkandave at 20:50 1 comment:

In Pursuit of the Robber Baron

One of my favourite medieval characters is Robert Guiscard, a Norman knight who journeyed to Southern Italy to make his fortune.

It was a bit tough at the outset, although much tougher on the locals, as he made a living as a robber baron in Calabria. But by 1057 he had become Duke of Apulia and two years later Duke of Calabria. In 1081 he launched a hugely ambitious invasion of Byzantium via modern day Albania. He defeated the Emperor Alexios at Durrazzo (Dures) and conquered most of Greece, although he didn't have the resources to hold it.

This is also one of my favourite wargame armies and GDWS did a display game of the Battle of Durrazzo in 2005. I have also travelled over large parts of his route in the Balkans.

As a result I was delighted to pick up a copy in Wigtown of Finch Allibone's travelogue of her own journey in pursuit of the Guiscard. She started from his birthplace in Coutances, through Italy and on to the Balkans. She tells Guiscard's story together with her own visits to the sites of interest on the way. An entertaining read if you can find a copy.
Posted by Balkandave at 14:56 No comments: 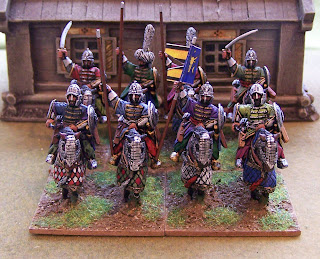 Posted by Balkandave at 20:41 No comments:


This is a very useful and rare collection of Serbian uniform plates from 1808. Posted on YouTube.

Posted on You Tube by "rasras21a"
Posted by Balkandave at 22:04 No comments:

I picked this book up at Triples together with a similar one in the series, Warriors of Japan. That one has some very good colour plates of troops in combat dress, not as they put it 'toy soldier' dress. 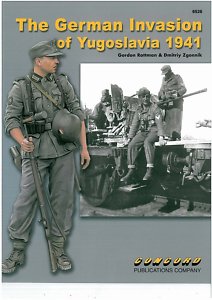 This one has a brief summary of the German invasion of Yugoslavia in 1941. But its real strength is in the excellent collection of photographs. Every arm of the army is covered with at least one photo of every troop type and equipment in the infantry divisions at least. Not the random collection of photographs that you get in some publications. This has been properly thought through.

Good value and highly recommended.
Posted by Balkandave at 21:49 No comments:

Some progress with the WW2 Yugoslavia project. A couple of platoons of Italian infantry fresh off the production line.

Yesterday was the Wappinshaw show in Glasgow's Kelvin Hall. A new venue for this show and not likely to be repeated as the halls are being refurbished for the Commonwealth Games.

It is a large hall with plenty of room for the games and traders. Mostly local or smaller traders as Partizan is the next day and attracts the bigger names in the hobby from England. I had got most of my purchases at Triples, but still managed to pick up some unusual kits and collected some Black Powder bases that Martin at Warbases had made up for me. The organisation was first rate and there appeared to be a decent attendance.

Our display game was Glasgow Green 1938. We thought this was appropriate for the Glasgow show. The focus being a big 28mm model of the Peoples Palace. Courtesy of Iain from Flags of War. 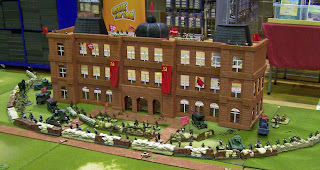 Four of us played the game and all agreed it was the most enjoyable game we had played at a show. Still plenty of time to chat to an appreciative audience. The Red Clydesiders just held on but it was very close. 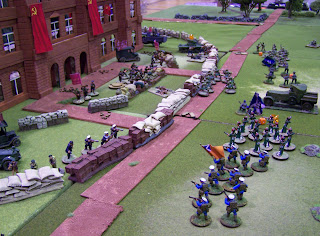 There were some other fine games, my quick collection of photies. 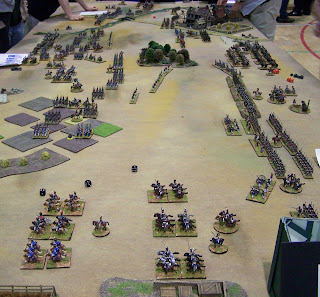 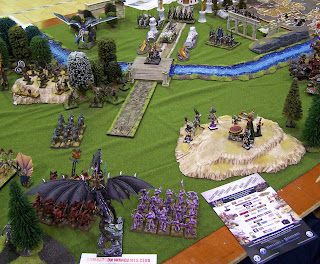 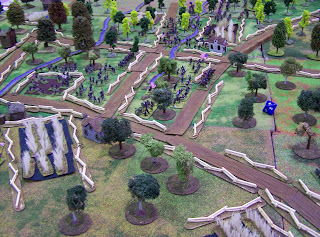 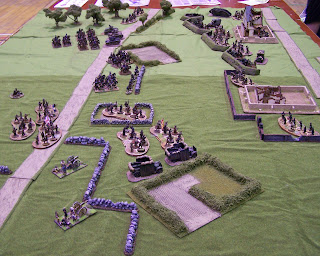 And another VBCW.
All credit to the organisers for a good local show.﻿