We had another go at using the Bolt Action rules today for a Very British Civil War battle.

Just under 1000 points a side which gave us 5 infantry squads a side plus supporting tanks and armoured cars. Mostly woods in the centre of the table which meant lots of close combat. The rules regard an attack within 6" as a surprise attack and that means no defensive fire. Big advantage for the attackers as they go first. Close combat is very bloody with the losing side destroyed.

My copy of the first Bolt Action supplement, Armies of Germany, arrived this week. The army lists are laid out like the ones in the rules, but with more detail. Beautifully illustrated with Osprey colour plates and models. Just what I need for the Tito raid project we are planning for next year. More details will follow as the project takes shape.

I will leave you with a couple of photies of today's opponent the Solemn League and Covenant. This first is the League command unit and the second is the Boys Brigade squad. These are from Iain's collection with his own great flags at Flags of War. 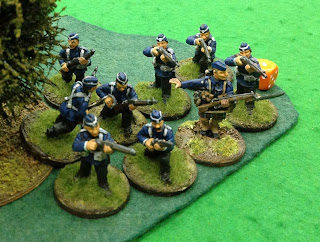 On Saturday we trekked up to the Kirriemuir Club show, Targe. One of the smaller Scottish shows, but usually well supported and well organised. Although as my alarm went off at 4:30am, my enthusiasm was somewhat dulled!

Our display game was Fort Ticonderoga 1777 - American War of Independence in 28mm using Black Powder rules. The actual battle was a rather tame affair with St Clair abandoning the fort when he realised the British had taken the high ground dominating the fort. So our ‘what if’ scenario assumes that St Clair was not aware of the full strength of the British forces and decided to take the initiative after his troops were forced off the outlying defences. So instead of abandoning the fort he counterattacks.

In this refight he did rather well. Knocked Fraser's Brigade off the hill and fought off the main British force. The game played well and looked good on the table. Most of the figures came from Andy McGeary's collection and very able paintbrush. The fort and redoubts were recycled from the ones I built for our game a few years ago on the Danube.

Lots of people came up for a chat about the game and the rules which is always one of the best aspects of putting a game on at a show. I also picked up a few useful items at the Bring and Buy, so a very worthwhile trip. Just need to catch up on some sleep! 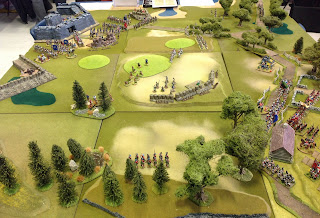 Posted by Balkandave at 21:39 No comments: