Dynasties on the Danube

This was the title of our big game at the GDWS double header this weekend. Early 18th Century using around 600, 28mm figures and Black Powder rules.

The scenario was based in 1719. Austria, Russia and Poland have come together in a new Holy Alliance to expel the Ottomans from the Balkans. They mobilise in Belgrade and advance south. The Ottomans are ready for them and block the route. Let battle commence.

A Croat Brigade is the Austrian advance guard and they seek to expel an Ottoman advance guard from a village that controls one of the river crossings. However, they get bogged down giving the main Ottoman army time to deploy. The Russians arrive on the Ottoman right and force the river against a Wallachian Brigade and the Ottoman right wing cavalry. The Tartars arrive next to harass the Russians, but are sent packing by the somewhat tardy arrival of the Polish army. Meanwhile the Austrian army is largely destroyed by the Ottoman left and centre. Score draw to the Ottomans.

Very enjoyable game, three players a side on Saturday and two a side on Sunday. As always with Black Powder, lots of fun! 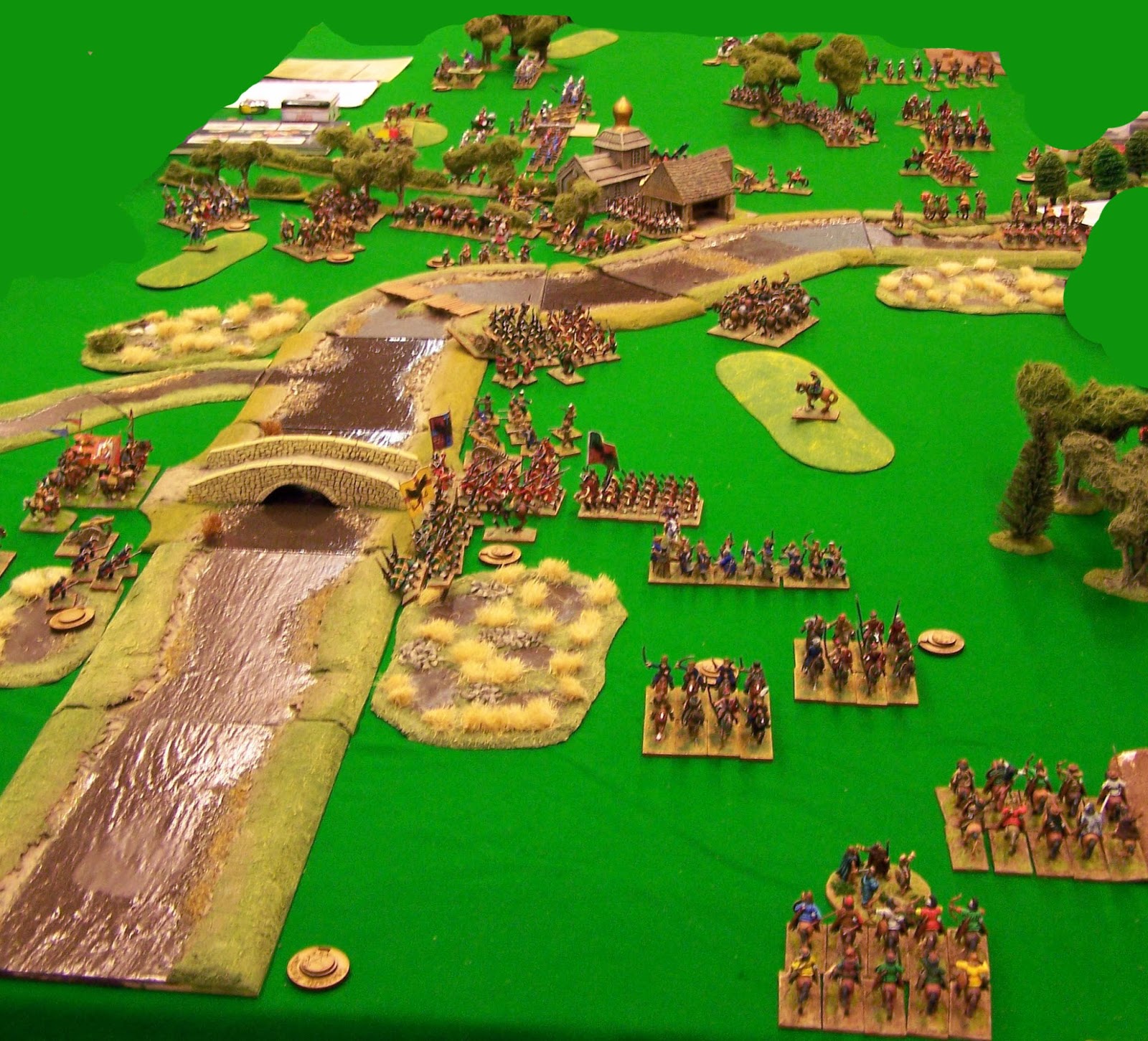 The full table, with the Ottomans at far left facing the Austrians. Russians in foreground trying to force the river. 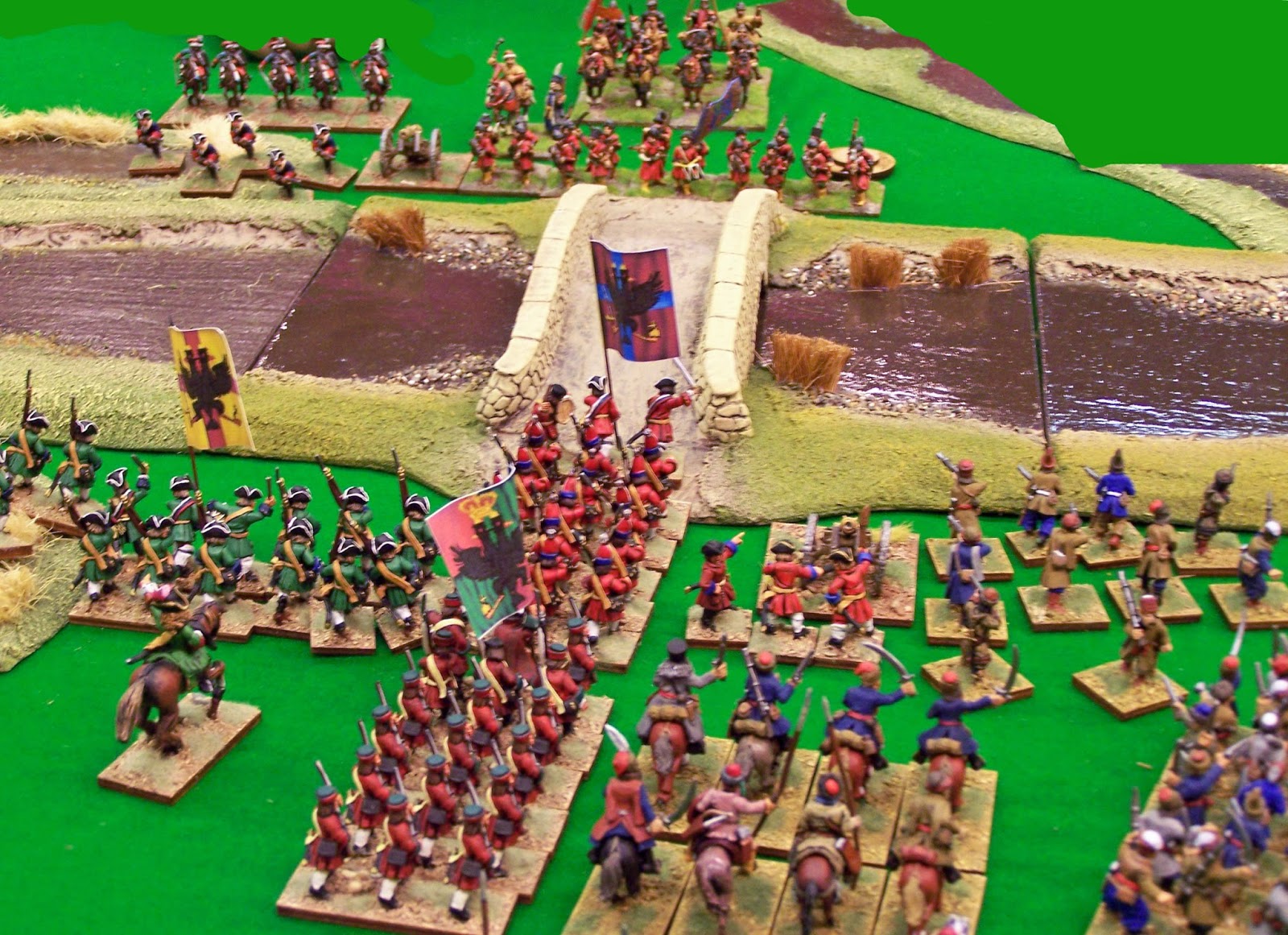 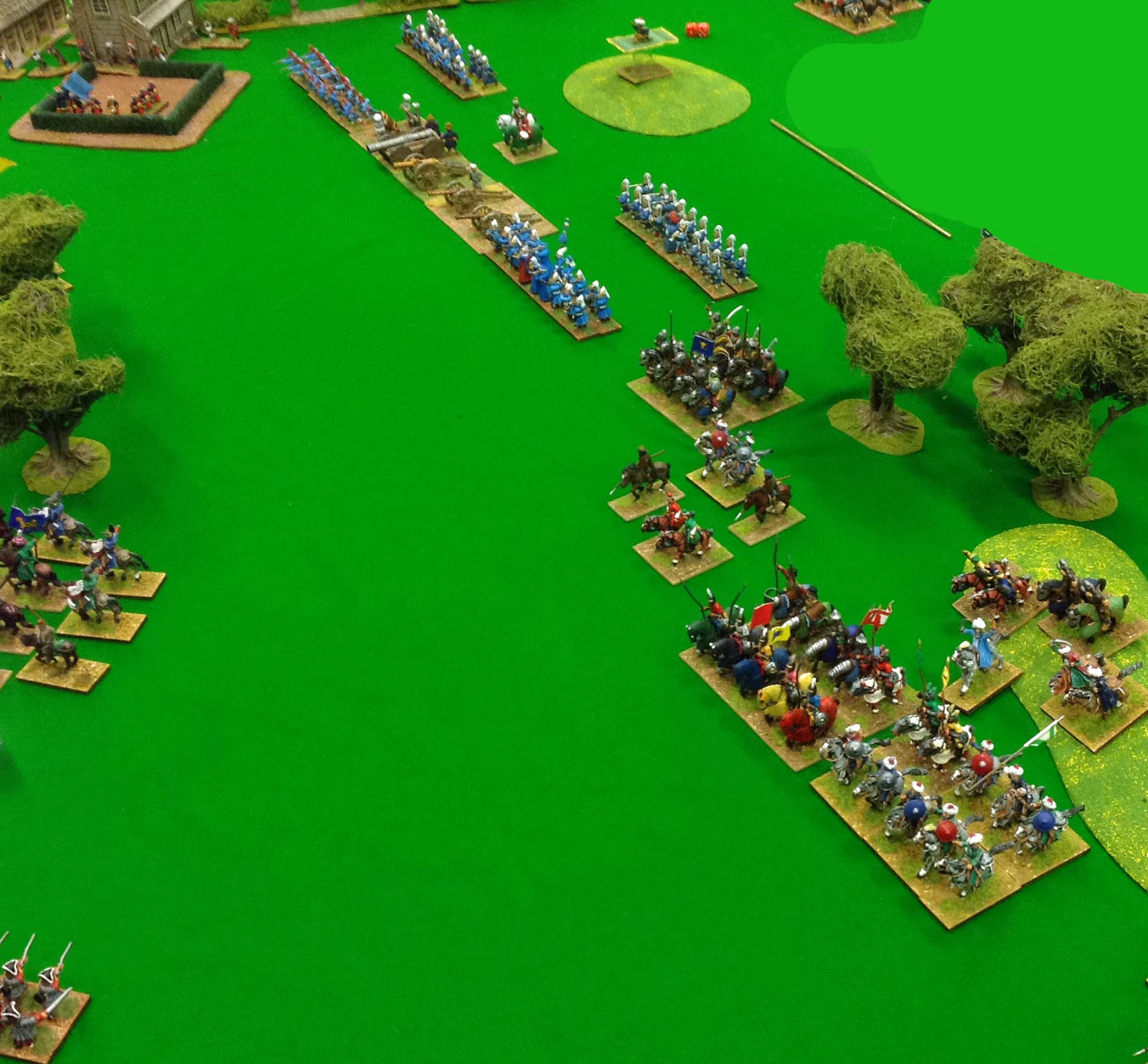 Ottoman centre with the Janissaries and artillery and left wing cavalry 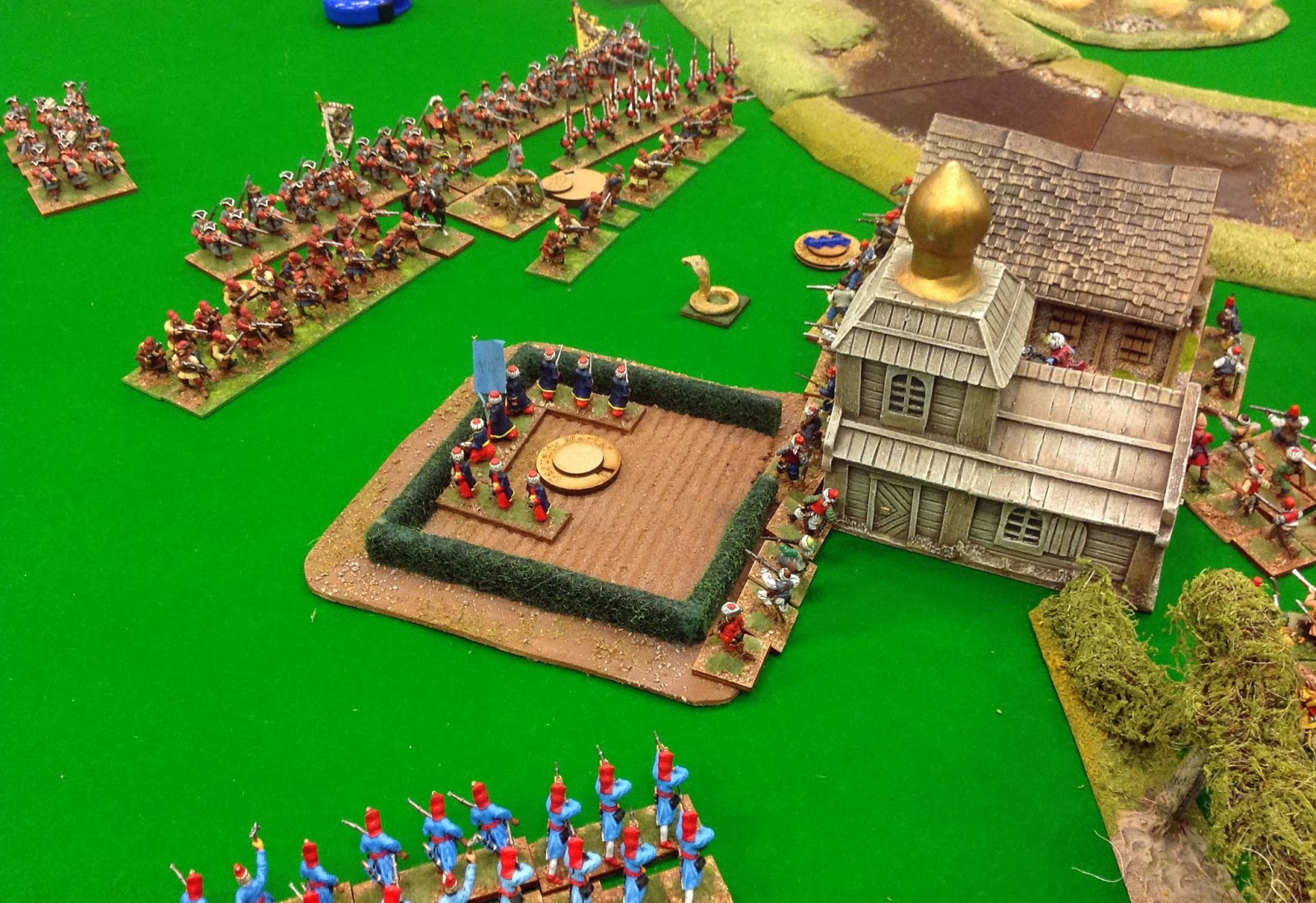 A news item on the BBC the other morning caught my eye describing how the National Archives are putting war diaries on the web as part of their First World War 100 project. If you haven't had a chance to delve here I can highly recommend it.

The war diaries are themselves interesting as hand written records of the daily actions of units in the front line. The idea is to get us to do the classification and many people have clearly already been taking part.

There is a much more on the site including access to a lot of other documents. I was searching for materials on the Salonica campaign and came across this wonderful memo from the First Sea Lord, Jellicoe telling the War Cabinet, in gloriously pompous tones, of the need to withdraw troops in May 1917. Somehow the typewriter gives the words more feeling than seeing them reproduced in a book. You can almost hear Jellicoe dictating them to a secretary. 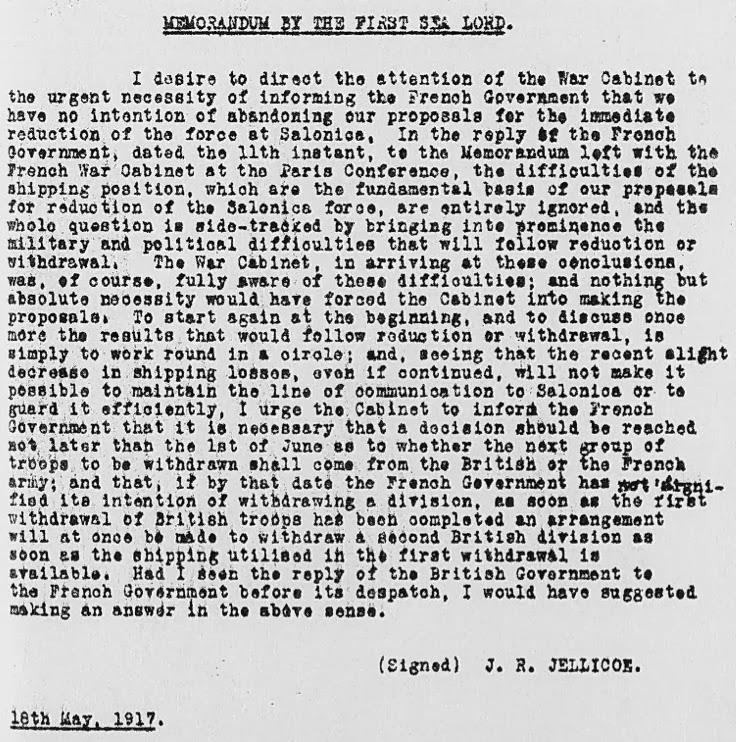 There are also General Milne's (He commanded the British Army) regular reports of his and the allies actions to the War Office.

There are also podcasts and film clips. I particularly liked this one of Franco's attack on Barcelona in 1939. The artillery far from being spaced out in WW2 style is firing from a column formation.


The National Archives are certainly providing a great resource.

Posted by Balkandave at 22:32 No comments:

I got one of my recent projects onto the tabletop yesterday at the club - Dacian Wars.

Two 300 point Hail Caesar armies organised into two divisions on either side. I haven't played a lot of Hail Caesar recently, so it was good to get back to the system that I think works really well for ancient battles. Unlike FoG and some other systems you rarely get individual units charging around the table, or even some of the Napoleonic style manoeuvring. You do what I suspect actual ancient commanders did. Devise your battle plan, hope your subordinates stick to it and possibly intervene personally with a reserve or at a critical moment.

Hail Caesar rules mechanisms largely force that with the proximity rule in particular. There is still a fun element with the order system that delivers the uncertainty of subordinates not doing what you want.

In this game, the Roman left division charged across the table while his left flank blundered and almost marched off the table. Sadly for my Dacian's, they recovered before I could take advantage, largely because one of my units blundered as well. The key with any warrior army like the Dacian's is to burst through in the first round. Fighting against tough veteran legionaires you are going to come unstuck if it becomes a slugging match, and so it proved.

Good game and gets me in the mood to start the research into the Bannockburn project, not to mention the growing pile of metal Scots spearmen! 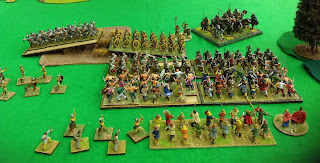 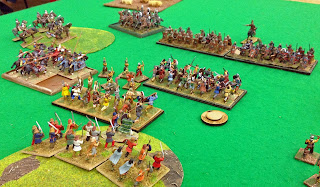 Posted by Balkandave at 11:23 No comments:

Last game of the holidays before returning to work tomorrow.

First outing for my new 28mm British and Japanese forces for the Malayan campaign of 1942. These are 28mm figures - Japanese are Warlord and the Brits are Perry's. The rules are Bolt Action.

By no means a finished project, but enough for a good game. The Japanese right wing crossed the stream and captured the village as the tank and the other infantry section pinned the Brits down on the road. I do like the special Banzai rule. It doesn't give the Japanese any 'supermen' close combat factors, it just keeps them fighting until virtually wiped out. 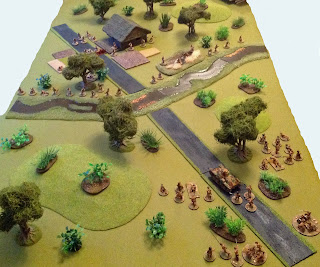 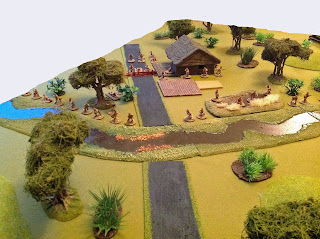 I have at last managed to get two 1500 point Flames of War armies on the tabletop for the Nomonham Incident.

In 1932, the Japanese occupied Manchuria, giving them a 3000 mile frontier with the Soviet Union. Between 1931 and 1939 there were many border clashes, the largest in May 1939 at Nomonham. The Japanese eventually engaged two divisions with supporting army units, totalling some 30,000 men. The Soviet counterattack, led by Marshall Zhukov, involved 77,000 troops including two rifle divisions and two tank brigades.

The title 'incident' implies a mere skirmish. However, the Japanese admitted to 17,000 casualties and the Soviets 16,000, as well as 196 tanks and 133 armoured cars. That's a battle at any time in history. Strategically, it encouraged the Japanese to look south for the next stage in their expansion and the Pacific War was the consequence.

For those interested in giving this a go, I have reviewed a couple of books and the Flames of War supplement 'Rising Sun' is excellent. It also covers the Finnish War.

A few photos from my tabletop clash. Waves of Russian tanks and infantry attack both sides of a small village. If it looks unbalanced, that's because the Japanese are all veteran, while the Russians are conscripts. The Russian steamroller won through on this occasion. 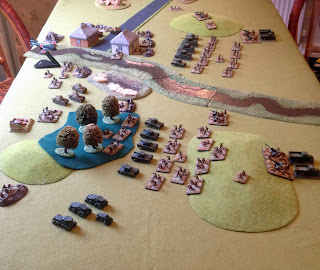 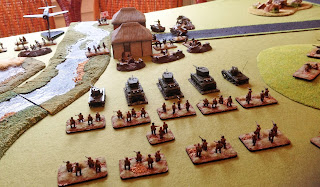 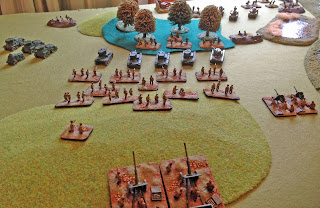 The models are from the Battlefront, Peter Pig and Plastic Soldier ranges. You will find a number of reviews of these figures in posts throughout last year.

A late addition was my xmas painting of these two very nice Battlefront Russian 122mm howitzers. 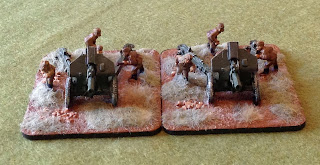 Posted by Balkandave at 11:42 No comments:

A lot of stories about liver disease in today's Scottish media that I didn't appreciate after last night's excess, but a break in the rain meant I got out for a walk and cleared my head. It's been a good holiday break with some reading, gaming and painting done. Of course this means that I may get too over optimistic about what can be achieved in 2014!

As always some finishing off to do:

Then some new projects:
On the subject of display games, a few other members have stepped up this year with projects, so my focus is something related to Bannockburn. The challenge will be to find a different angle.

The other big anniversary is of course the outbreak of WW1. As it kicked off in the Balkans, I may do something Austrian and Serbian at one of the shows. I certainly plan to highlight this part of the war and may even add a figure or two to my collection. Credit to Max Hastings, who has given this more coverage than it usually gets in his book 'Catastrophe', my current reading.

On reading, I am still working my way through the reading pile I purchased at Hay-on-Wye, but there is so much good new stuff coming out I may still be looking at it next year.

I have highlighted a few other anniversaries in the month's update on Balkan Military History. Hard to believe I have been editing this website for 17 years! Chaldiran is one that particularly caught my eye as an interesting action. Plus the Ottoman/Venetian war of 1714, when the Turks recaptured the Peloponnese.

Well, all that should keep me busy. All the best for 2014 and good luck with your own projects.

Posted by Balkandave at 13:40 No comments: