When we started the Muret 1213 project there was a naive assumption that we had most of the figures required. Of course when we came to look at army lists we realised how many knights would be required. After further research it also became apparent that most of club members collections were later Hundred Year's War knights with all too much plate armour for Muret.

So, not for the first time we are in mad painting mode. Carronade is only two weeks away and I have been away on business for a week.

Thankfully Andy McGeary's  skilled brushwork has helped with this unit of Templars. They are Old Glory figures. 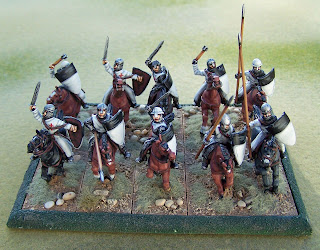 This is my more modest contribution from the Gripping Beast range. A particular irritation was the prelate. In a rush I gave him a sword, but it didn't look right, even for a medieval bishop. My nighttime reading is on the period when the author reminded me that fighting prelates used maces so they didn't spill blood. Apparently bashing your enemies head in with a mace was fine! 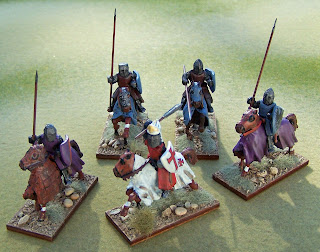 More on the painting baton. Some late nights ahead! 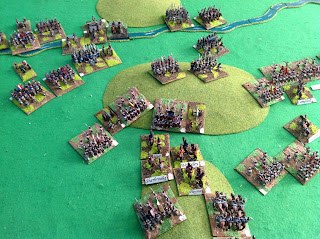 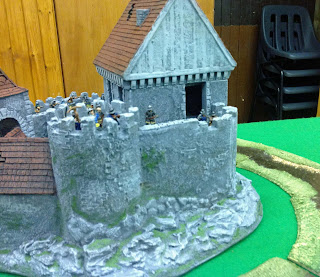 Posted by Balkandave at 10:39 No comments:

The text covers, in some detail, the battles on the Hungarian Plain in the autumn of 1944. In particular the battles at Torda and Debrecen. I have driven around this area and can confirm that this is prime tank country, broken only by the many rivers that became a feature of the defensive positions.

Hungary became a battlefield in late 1944, when the Romanian border was breached by the Russians and the Romanians switched sides. Heavily outnumbered Hungarian and German units fought a series of strategically defensive operations, with some local counter attacks. They often held up large Russian and Romanian units, but in the end numbers prevailed.

This is a big book physically, almost coffee table size. The level of detail is a remarkable testimony to the research that must have gone into this book. Ideal for wargamers, as it describes German battle groups down to the numbers of men and tanks for a huge number of actions. It is not so strong on the Russian and Romanian units.

The level of detail makes the narrative hard going in places, but it's supported by good maps and plenty of them. Again, something you don't often get with this type of publication. Helion's high standards show throughout this book. However, the book is worth the price for the photographs alone. Hundreds of them that make full use of the books size. Plus orbats and some nice colour plates of the main AFV's.

If you are planning on gaming this section of the Eastern Front - this is a must have book.
Posted by Balkandave at 22:41 1 comment: