My latest reading has been Philip Matyszak's, Roman Conquests: Macedonia and Greece.

The book starts with some very nice maps and a good overview of Greece in 221BC. We are then presented with the wider Mediterranean context including the Punic Wars and the wars of Alexander's successors.

The detailed narrative covers the three Macedonian wars and the internal conflicts within Greece. Or how Rome started to acquire its eventual empire in the eastern Med. The crucial battles of Cynoscephalae and Pydna include a discussion on why and how the Roman legion defeated the Macedonian phalanx.

This is a conflict I had limited knowledge of, other than the main battles. This book is an excellent introduction and very well written. Highly recommended.

I returned to the Very British Civil War today at the club. This time using Bolt Action rules with 1000 points a side. My Clydesiders against Iain's League of St Andrews.

My Clydesiders received some fraternal reinforcements this week in the form of a T26 tank from the Soviet Union, with 'volunteer' tank specialists. It did very well in its first outing, knocking out an enemy tank and supporting the final push to victory over the bourgeois posties, Covenanters and others that make up the League. 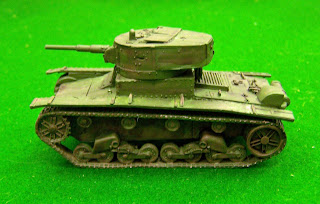 Scotland is not of course the first time the T26 has been exported. It first arrived in Spain on 12 October 1936, when a force of 50 landed in Cartagena commanded by Brigadier Krivoshein. They were quickly in action in the defence of Madrid. The T26 was not a very robust design and most were out of action being repaired by December. After that they were husbanded for special operations, although infantry cooperation was abysmal throughout the Spanish Civil War.

Despite these difficulties the T26 was probably the best tank in the Spanish Civil War, at least until the BT5 arrived. The Nationalists captured so many that one was attached to each of their Pkw I units. The 45mm main gun outclassed anything the fascists could supply. Around 281 were supplied in total. The T26 remained in Spanish army service until the 1960's.

The model comes from the Empress Miniatures range. Painted a neutral green with dry brushing earth and a coat of Devlon Mud. While it is an excellent model, the parts are not a great fit and needed a lot of work to get them to fit, particularly the gun barrel. At £19 a go they could do better. Some instructions wouldn't go amiss either. I would have struggled without the excellent Osprey, Spanish Civil War Tanks.

Bolt Action rules worked well for the game. Although we will probably add some chance cards next time.

A hundred years ago this month, the First Balkan War began. On Oct. 8, 1912, Montenegro declared war on the Ottoman Empire, and invaded Albania. Bulgaria, Greece and Serbia followed suit as part of the Balkan League. By March 1913, their campaigns had effectively pushed the weakened Ottomans out of the Balkans. However, by July 1913, Greece and Serbia would clash with Bulgaria in the Second Balkan War, a bitter month long struggle that saw more territory change hands and many more lose their lives.
In military terms these conflicts were a prelude to the far greater slaughter that was the First World War. Ariel bombardment, trench warfare and the machine gun all played a similar role as they would in the later conflict. The Balkan states were pawns in a much bigger game of great power rivalry. Serbian nationalism, backed by Russia, put the two ultimately at odds with Austria-Hungary, triggering World War I. However, “The Balkans were not the powder keg, as is so often believed: the metaphor is inaccurate,” writes Balkans historian Misha Glenny, in his book, The Balkans: Nationalism, War and the Great Powers, 1804-1999. “They were merely the powder trail that the great powers themselves had laid. The powder keg was Europe.”

I have a number of resources relevant to this conflict on the Balkan Military History website. The armies in 15mm, a bibliography, a feature on the key early battle of Kumanovo and travel tips are spread across the travel section.

Strategos: Born in the Borderlands

My latest fiction read has been Gordon Docherty's, Strategos.

It is set in the borderlands of the Byzantine Empire in 1046. The Seljuk's are threatening with raids and full blown invasion. Our hero Apion has been orphaned and brought up by a former Seljuk commander turned farmer. He joins the Thema forces and with remarkable speed is promoted to command positions. In between there are several sub-plots involving agents of the Emperor.
This book had a number of good reviews that attracted me including, "The author does seem to choose periods of Imperial history which are not obvious choices for the setting of heroic fiction. Similarly his heroes tend to be disadvantaged, almost fatally flawed, when we first encounter them, but they come through in the end."

I think this is fair comment. It certainly does make a change from Imperial Rome as the setting. However, I did struggle at times with this book. The characters were perhaps a little too well developed and I was left wondering if he was going to get on with the story. I put it down several times, to read other books, a sign that I was not totally enthralled.

It is good value on the Kindle at £1.99, so please don't let me put you off if this is your period.
Posted by Balkandave at 22:39 No comments: