A new member at the club expressed an interest in playing 19th Century Principles of War today. This was a good opportunity to dust down my armies for the Russo-Japanese War 1904/05.

For those not familiar with this conflict it was the first major war of the 20th century. The main cause was the rival ambitions of Russia and Japan over Manchuria and Korea. The major theatres of operations were Southern Manchuria, together with naval action in the seas around Korea and Japan. The Russians sought a warm water port on the Pacific as Vladivostok was only operational during the summer and Port Arthur would be operational all year. The surprise Japanese victory transformed the balance of power in East Asia, resulting in a reassessment of Japan's recent entry onto the world stage. The embarrassing string of Russian defeats undermined the Tsarist government, and proved a major cause of the Russian Revolution of 1905.

I first 'discovered' this conflict over 30 years ago when I was given a copy of The Tide at Sunrise by Denis and Peggy Warner. This is an excellent study of the war although a more recent study and probably easier to source is Rising Sun and Tumbling Bear by Richard Connaughton. There is also a useful Osprey essential histories. Of course the real inspiration is the marvellous TV series, Reilly Ace of Spies and the episodes that concentrate the siege of Port Arthur.

The starter for the Japanese army was the old Lancashire Games range that I first collected for the Boxer Rebellion. By modern standards these are not good figures. For the Russian's I had a good selection of Minifigs. I picked up the figures below at Salute  a few years ago. They came in 50 figure bags but I can't recall the company who made them. I haven't seen them since but I hope the molds are still around as the animation is superb for 15mm. 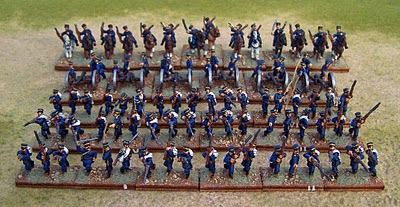 PoW is a good ruleset for this conflict. It correctly puts the Russian player in the difficult command position of controlling a sluggish force with poor fire discipline. I got away with it today, through a combination of a crowded table in terms of terrain and my opponents poor initiative dice. This led him into a piecemeal attack on my best units, without the opportunity to manoeuvre around me. An enjoyable game done and dusted in just over three hours.
Posted by Balkandave at 20:17 No comments:

Slow progress on the painting and gaming front recently; work does get in the way of the hobby!. More done than I think but limited to short bursts.

Anyway, the British allies for the Greeks are now finished and the sun is even shining so, temperature apart, you might even think we are up the Pindos Mountains. 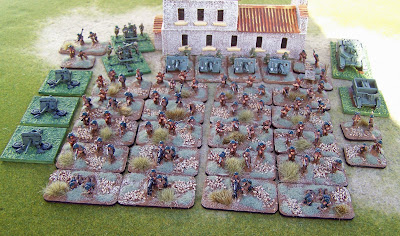 Posted by Balkandave at 12:08 No comments:

Just finished FoW rebasing the Greeks of WW2. The Italian Greek campaign of 1940 is one of the more interesting and underplayed conflicts of WW2. A totally inadequate Italian army blundered into the mountains of north-west Greece, where it was defeated, thrown back into Albania, only to be rescued by the German invasion of Greece the following year. The common perception of this campaign is of a massive Italian army being held off by valiant, outnumbered Greek forces. Valiant they certainly were, however, the opposing forces were actually fairly evenly balanced.

I wrote a short history of the campaign for the Society of Twentieth Century Wargamers Journal a number of years ago and an updated version is on the Balkan History history site. I have also visited the main battlefields in Greece and Albania, some high up in the mountains. It gives a very different perspective of the campaign.

Next stage is to rebase the Brits as allies.
Posted by Balkandave at 17:51 No comments:

I have enjoyed my latest Osprey, Carthaginian Warrior 264-146BC. As I have mentioned before this was my first wargame army and I have a soft spot for them. Made my first visit to the site of the city a few years ago.

This is in the Warrior series so the focus is on the men who fought for Carthage through a series of wars, most famously of course, the Punic wars against Rome. The unusual feature of Carthaginian armies was that they were almost all mercenaries or at least levies from subject tribes. This makes the achievements of Hannibal particular very special in my view. His leadership skills must have been amazing.

This study by Nic Fields takes the reader through the recruitment, equipment and experience on campaign and in battle. Good narrative supplemented by glorious artwork from Steve Noon. Recommended.
Posted by Balkandave at 10:17 No comments:

Finished rebasing my WW2 Italians for Flames of War. I can use some of the units to supplement the Nationalists for the Spanish Civil War project. But the main reason I collected them was for the campaign against Greece in 1940. So I am now rebasing the Greeks and the Brits as well. Not my favourite task as it takes me away from real painting - but they were all originally based for Rapid Fire (individual bases), so needs must. 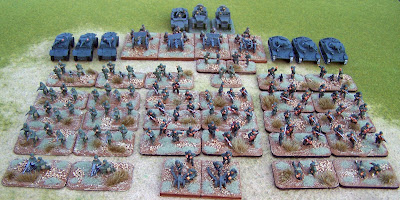 Plus, I have finished this month's update of Balkan Military History. The feature article is on ﻿Pyrrhus of Epirus and his army, inspired by Jeff Champions book. A good general history of one of the ancient world's greatest battlefield commanders. 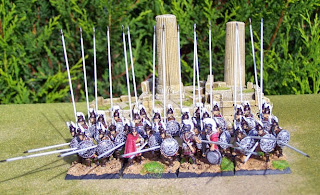