Heroic Voices of the SCW

My Spanish Civil War project in 15mm is grinding slowly on. My latest reading has been Heroic Voices of the Spanish Civil War by Peter Darman.  This book covers the actions involving the International Brigades, through the stories of individual soldiers. The format is a brief overview of the battle, followed by a dozen or so eye witness accounts. This is an interesting and different approach that gives you a real feel for how the war was fought from a soldiers perspective. As all these soldiers were volunteers from around the world, you also get a better understanding of what motivated them to fight in a war far from home.

Some progress on the painting front. My Republican armour is now completed. A BT5, 3 T26 light tanks, 3 BA10 armoured cars and a BT6. A mixture of Skytrex and QRF models. I decided on a brown primer, then a dark green khaki, finished off in Soviet forest green. Then plenty of earth brown around the tracks and some drybrushing on the upper bodywork. A few simple numbers and we have a reasonable finish. I need a finer brush (and a steadier hand) to tackle a few slogans.

Below is the BT5. 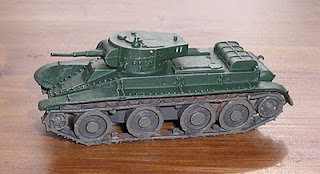 Followed by some T26 light tanks

No Pasaran!
Posted by Balkandave at 12:33