A hundred years ago this month, the First Balkan War began. On Oct. 8, 1912, Montenegro declared war on the Ottoman Empire, and invaded Albania. Bulgaria, Greece and Serbia followed suit as part of the Balkan League. By March 1913, their campaigns had effectively pushed the weakened Ottomans out of the Balkans. However, by July 1913, Greece and Serbia would clash with Bulgaria in the Second Balkan War, a bitter month long struggle that saw more territory change hands and many more lose their lives.
In military terms these conflicts were a prelude to the far greater slaughter that was the First World War. Ariel bombardment, trench warfare and the machine gun all played a similar role as they would in the later conflict. The Balkan states were pawns in a much bigger game of great power rivalry. Serbian nationalism, backed by Russia, put the two ultimately at odds with Austria-Hungary, triggering World War I. However, “The Balkans were not the powder keg, as is so often believed: the metaphor is inaccurate,” writes Balkans historian Misha Glenny, in his book, The Balkans: Nationalism, War and the Great Powers, 1804-1999. “They were merely the powder trail that the great powers themselves had laid. The powder keg was Europe.” 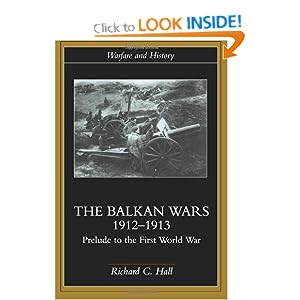 I have a number of resources relevant to this conflict on the Balkan Military History website. The armies in 15mm, a bibliography, a feature on the key early battle of Kumanovo and travel tips are spread across the travel section.