'To the Strongest' is a new set of wargame rules for the ancient and medieval periods by Simon Miller.

I was attracted to them following a couple of reviews including the latest edition of Wargames, Soldiers and Strategy. The mechanisms are very different from anything I have played before, offering up the prospect of a quick game.

Firstly, there is no time wasted on measurements because it uses a grid. You don't need ugly squares on your tabletop, I just put felt pen black dots on the reverse side of my normal cloth. Units generally move one square for foot, two for mounted. Diagonal and sideways moves are possible, but require higher activation card scores. This really does speed up play and obviates the need for any debate over movement distances, match ups etc that can get in the way of a game like FoG. You can use different size squares depending on the scale of figures you want to use.

Secondly, there are no dice. Instead you use two packs of playing cards. You separate the court cards out to be used for strategems. The number cards are used for everything else. Activation requires anything other an Ace to start with and you can keep going so long as you draw a higher card. If you fail that ends the turn for that command. Activation can be used to move, shoot or charge into melee. Again the cards are used with a minimum score to hit, plus or minus a few modifiers. Then the defender saves and then hits back. There are different hit scores and saves for units in the generic or specific army lists.

I have only played one game, but it works very well. I used 100 Years War French and English and it resulted in a quick game that looked and felt right for the period. Melees did drag on a little longer than I would have expected, but they may just have been the luck of the cards. 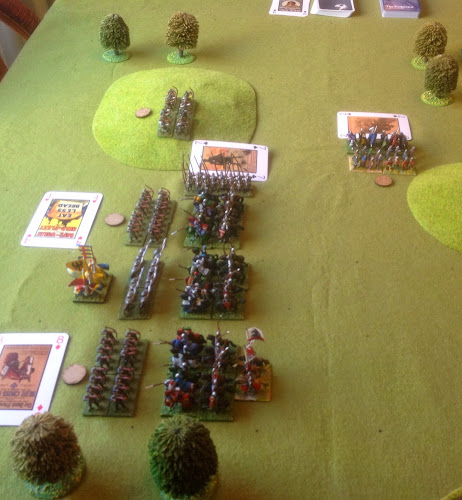 The rules come as a very reasonably priced (£9.99) PDF download and are nicely laid out with hyperlinks between the relevant sections. The QRF could have done with a few more of the basics, but once you have played a few times, I suspect the numbers will be remembered easily enough. There are a few army lists available as a free download and the generic points system is easily adaptable for others.

Playing cards are perhaps not visually great, but you can substitute poker chips or something else. The MDF markers are ammo chips. Each shooting unit has a limited number at the start of the game, another rarely used mechanism in ancient wargaming.

These rules are a bit different and well worth look at this price.