A year before three Roman legions were famously destroyed in the Teutoburg Forest, a three-year rebellion in the Balkans came to an end. The Great Illyrian Revolt took 15 Roman legions more than three years to conclude, at a considerable cost in men and resources. This book by Jason Abdale is the first to cover this forgotten conflict. 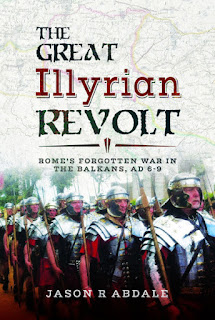 The author starts with a detailed discussion about the Illyrians. While many modern Albanians claim they are descended from them, they were, in fact, a large group of around sixty tribes living in the countries that made up the former Yugoslavia, as well as Albania. The Greeks and Romans would have described them as barbarians, but that only meant they were foreigners or outsiders. They lived in towns and cities, traded across the Mediterranean, had a thriving culture, and their armies were well organised with modern warships that dominated the Dalmatian coast.

Their weakness, like most of Rome’s opponents, was that they never united as a nation. The individual tribes were culturally distinct, and their practices reflected the geography of the region. Those closest to Greece had become largely Hellenised, while the rest broadly split between the Dalmatians in the mountains of modern-day Bosnia, Croatia and Montenegro – and the Pannonians who lived in the more open plains of northern Serbia and eastern Croatia, including parts of modern Hungary.

The little we know about the Illyrians was written by outsiders and is undoubtedly biased. This is supplemented by archaeology, but the story of the Great Revolt is based mainly on Roman sources. The author makes several suggestions and suppositions, which may, or may not, be justified.

The Romans first came into contact with the Illyrians early in their expansion across Italy. However, they took a serious interest because of the actions of Illyrian pirates as the Romans moved into Greece. The Republic fought several wars against Illyrian tribes before creating the Province of Illyricum in 59BC. This controlled much of the coast and some of the internal trade routes. Mineral deposits, including gold and silver, were an important resource that the Romans wanted to secure.

The Roman civil wars were fought over part of these territories, and Caesar Augustus extended Roman control into Pannonia after a tough campaign that ended in 9BC. The so-called ‘Pax Romana' followed, and while there was plenty of conflict across the empire, Illyricum was relatively peaceful.

This changed in 6AD when Augustus recruited Illyrian troops for a planned campaign in Germany, led by Tiberius. This also denuded the province of regular soldiers. Burdensome Roman rule had increased dissatisfaction, and when it became apparent that they outnumbered the Romans, rebellion broke out. It was led by Bato of the Daesidate tribe. We know little about him, but he succeeded in uniting many of the tribes and defeating local Roman units.

There followed three years of warfare in which the Illyrians defeated the Romans several times. The conflict sucked in ever larger numbers of Roman troops and their allies, including the Thracians. However, as ever, Roman persistence and numbers triumphed. The fifteen legions deployed is about 75,000 men, plus auxiliaries, allies and support units. Fortunately for the Romans, Arminius’s revolt in Germany started just after Bato had surrendered. The Empire would have struggled to contain two rebellions of this size.

The author does his best with limited sources. His educated guesses of names and places are explained so the reader can make up their own minds. He has an informal writing style, which may irritate some readers, but it doesn't detract from the book's readability. My only criticism would be the use of modern and historical analogies, which are sometimes tenuous, overlong, and add little to our understanding of the period.

Overall, this is a very welcome book, which opens up an interesting and little explored period of Balkan history.

I have a small DBA Illyrian army in 15mm, which is looking a bit dated. Warlord and Relic Miniatures do some light infantry types, which fought with Alexander the Great. These look fine for the Hellenised southern tribes, but the further north you go, Celtic influences would be more apparent. This is reflected in the Magister Militum range in 15mm. A bit of mix and match with some conversions looks like the only realistic approach.

Romans are not a problem. Either from the Republic for the earlier wars or the Imperial Romans for the Great Revolt. This was a period when the equipment of the legionarius was evolving, but probably not as far as the Lorica Segmentata as depicted on the book cover. The dished oval shield would also be more common than the squared edged version, which only started to be adopted in the early 1st Century.

Reading the book inspired me to paint the 28mm Roman tent I purchased at the Varpartnak show from Magister Militum. A lovely model that paints up well. 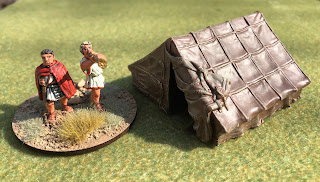