Outwith the Balkans, I am always drawn to a new book about Carthage. It was my very first wargame army, although, like most wargamers, it was a Second Punic War army led by Hannibal.

Books on Carthaginian campaigns outside the Punic Wars are rare. So, this new book, Carthage’s Other Wars, by Dexter Hoyos (Pen and Sword), is very welcome. 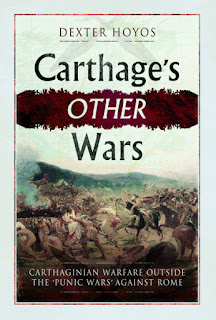 The author starts with the city and state, in the context of the Mediterranean during the ancient period. Carthage was at its core a trading state, and this was reflected in the army and fleets, which relied heavily on mercenaries.

We then get a narrative of the numerous wars Carthage engaged in from the 5th century BC. These campaigns mostly involved Sicily where Carthage established a territory in the west of the island called the epikrateia. This brought Carthage into conflict with the Greek city-states in the east, primarily Syracuse. These campaigns occasionally threatened Carthage itself, although only once did a Greek army set foot in the African homeland.

By the summer of 264, Carthage and Syracuse became formal allies in the face of the growing power of Rome. Once invited to intervene in Sicily, the Romans never left, ending the Greek wars and opening the first chapter of the Punic Wars.

The campaigns in Africa and Spain are briefing covered. Carthage expanded into Libya and established new colonies. This brought them into conflict with the native Libyan peoples and the Numidians, although the latter were often allies. The stress of the First Punic War led to the Truceless War in Libya, which involved atrocities that were horrific even by the standards of the period.

After losing Sardinia and most of Sicily, Carthage invaded Spain in 237. They quickly developed a significant empire, which brought in substantial revenues and revitalised the state. It was here that the nine-year-old Hannibal learnt the art of war from his father, Hamilcar.

The challenge in writing a book on these wars is the scarcity of sources. I would have loved to find out more about the early Carthaginian expeditions, which went as far as the west coast of Africa. However, the longest surviving Carthaginian text is just three pages long. Modern archaeological work has uncovered some parts of the early city, despite the destruction and subsequent rebuilding by the Romans. I had the pleasure of visiting the site a few years ago.

This means we rely on mostly non-Punic sources, including Greek and Latin records. Even these, like Diodorus of Sicily, were written around the time of Julius Caesar. Self-evidently they are not telling the story from a Carthaginian viewpoint. Some were more objective, including Aristotle who put the Carthaginian system on a par with those of many Greek states.

The other challenge is names. Individual Carthaginian names repeatedly occur over the centuries. Hanno, Hamilcar, Hasdrubal and Mago pop up frequently. The author does his best to make sense of the story, but it does make the narrative a bit difficult to follow.

Allowing for the historical challenges, Dexter Hoyos does his best with the limited and often contradictory sources. The narrative of the wars in Sicily can get a bit tedious after a couple of chapters, and I enjoyed the early and later chapters covering the other campaigns the most. This book opens up a period that deserves closer attention and for that alone is worth a read.