Along with my re-reading of Nigel Tranter's historical fiction, I have been reading Ray Bradfield's biography of the author. 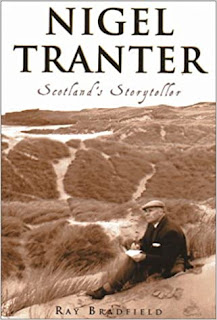 I have always thought of Nigel Tranter as an east coast Scot, but I discover he was, in fact, born in Glasgow. Not far from where I used to live and close to Hampden Park, the home of Scottish Football. The family moved back east fairly early on, and he is rightly associated with East Lothian for most of his life.
We don't hear much in this book about his war service in the Royal Artillery. He was somewhat older than his fellow junior officers, and as a writer, he didn't share their passion for drinking, smoking and sport. However, his quiet war gave him time to write and supplement the family income.
In the army, he developed his writing technique as he walked, as that was the only way he could get the peace and privacy he needed. After the war, he developed his daily routine of rising at 7am, and after breakfast and prayers, he set off on a walk. He lived for most of this time at Quarry House in Aberlady Bay. His walk would mostly cover the shoreline for ten or twelve miles. In the evening, he would type up his notes on an old typewriter and do some research ready for the next day. At one stage, his typewriter had a faulty 'b' key, so he would type 'o' and then convert by hand. His manuscripts were bound with old shoelaces.
His productivity was astonishing, running to 130 books. Right through the 1950s and 1960s, he was publishing three or four books a year as well as a constant stream of magazine articles. Before he settled down as a historical novelist, he was writing westerns and children's books. It was commonplace for book reviewers to say that Nigel Tranter has taught most Scots all the history they know. If true, it doesn't say much for how history is taught in schools, and Tranter was pretty critical - 'dry as dust', he would say. He would also reflect that "A nation that doesn't know its own history, has lost its memory."
He was also a campaigner, although how he found the time amazes me. After the war, Tranter was heavily involved in the Covenant Association, campaigning for what much later became known as devolution and the reestablishment of the Scottish Parliament. He lived to see it happen in 1999. He wasn't a nationalist and eventually found his political home in the Liberal Party, today the Liberal Democrats. It was while I was working at their conference that I met him. We may not have shared the same politics, but we did share a love of history.
He was drawn into the famous stunt of Ian Hamilton's to steal the Stone of Destiny from Westminster Abbey, first stolen from Scotland by Edward I. Of course, anyone who has read his books will know that he didn't believe this was the real coronation stone. Still, he recognised the symbolic value, and today it resides in Edinburgh Castle. His many other campaigns made him a regular contributor to The Scotsman. I wonder what he would have done with social media!
Film options were bought on several of his books, and stage plays were done on three. If only Braveheart had used his script, it would at least have a semblance of historical accuracy! The best seller was the Bruce trilogy, but his biographer argues that the Montrose books are the best written, and I agree. He also wrote some important non-fiction history. His The Fortified House in Scotland ran to five volumes and documents no fewer than 663 fortified houses, not castles.
The book finishes with a nice end piece which includes, "And tomorrow, he will be out again, striding along the shoreline, this man who has given us back our past, walking with Wallace and Bruce, his mind far distant from the petty concerns of everyday."