Fought my first full game with the revised edition of Flames of War. Also an opportunity to field some recent reinforcements for my International Brigades fighting off Franco's forces and their Italian allies in the Spanish Civil War.

It may just be my inexperience in playing these rules, but I struggled to find too many changes in the revised rules. Assaults are certainly simpler but the other changes have largely passed me by. I know a lot of wargamers get a bit sniffy about Flames of War, but I think they are an elegant system that give a good game.

For this game the International Brigade was occupying a reasonably strong position based on a village with hills on either side. The Nationalist launched pinning attacks on the right and centre while the Italians, supported by tanks and artillery, attacked the left. They were initially successful but a counterattack drove them back. The forces of fascism held back, at least for another day. 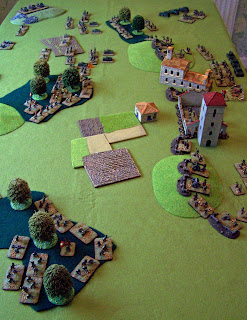 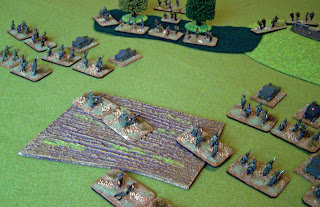 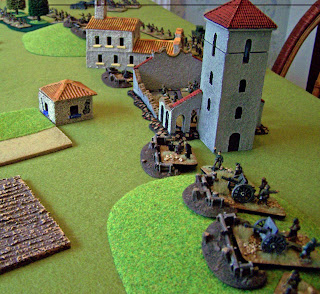 The village and International Brigade position

Moors and Carlists in the centre

Lots of 75th anniversaries for the Spanish Civil War at present. It was 75 years ago last October when Largo Caballero, Prime Minister of the Republic authorised the raising of foreign volunteers. Last February was the anniversary of the Battle of Jarama, where the International Brigades, British Battalion in particular, lost many men defending Madrid.

The International Brigade Memorial Trust is currently taking an exhibition around the country and it's well worth a look if it's in your area.
﻿
Posted by Balkandave at 00:01