Onwards with the Far East project and my latest reading is 'Japan's Greatest Victory - Britain's Worst Defeat' by Colonel Masanobu Tsuji. If you need to read one book about the Malaya campaign, this it it. 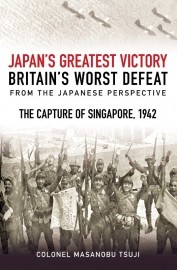 Colonel Tsuji, Major as he was in 1941, was a staff officer who prepared the Japanese plan for the invasion of Malaya. In this book he tells the story of the campaign that led to the fall of Singapore from a Japanese perspective. Not only did he write the plan but he was there, very often leading from the front, throughout the campaign.

It's a great insight into the campaign and deals with many myths about the campaign. We get a proper orbat that shows how outnumbered the Japanese were. There was no real jungle training, just some inspired leadership and a short booklet that is reproduced as an appendix. Most of the troops had combat experience in China, but not in the jungle.

As always a bit of reading inspires me to get on with the painting. These are the latest Japanese in 15mm from the Peter Pig range. Two 37mm ATG's and two 70mm infantry guns with command teams. Plus two Nikuhaku teams for close quarter anti-tank duties. There was much cursing and superglued fingers with these guns, due to the poor assembly and totally inadequate lugs for the wheels in particular. But got there is the end. Back to the Russians next.