Back to the Far East and the painting table, after my sojourn in the ACW.

These are the new Battlefront models of the Type 95 Ha-Go light tanks. 1250 of these useful tanks were built from 1935. It mounted a 37mm gun and a 7.7mm machine gun. While lightly armoured (6-12mm) it was an effective tank in the jungle areas such as Malaya, although seriously outgunned against the Russians.

I have been critical of Battlefront vehicles, but these fitted together well with only limited flash. Even the gun had a sort of lug to glue it into, although they could still do a lot better. I do like the tank commander with the sword. Absurd, but looks great!

The defending Russians are my latest batch from the Plastic Soldier box. 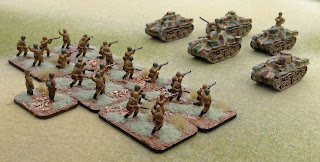