The latest reinforcements for the French in my 28mm Peninsular War project, comes in the form of Napoleon’s Irish Legion. A bit exotic, but French line units are just too boring.

The French acquired a number Irish recruits from their abortive 1798 and 1801 rebellions, and there were plenty of Frenchmen of Irish descent given the long tradition of Irish troops in French service.

The Irish Legion mustered at Morlaix in Brittany in December 1803. They were organised as a light infantry battalion. The first casualty was caused by a duel, something of a regular occurrence!

They had rear echelon duties in the Ulm and Prussian campaigns, followed by garrison duties on the Channel coast, before being posted to Spain in 1808. The creation of a second battalion resulted in the Legion being reclassified as the Irish Regiment in December 1808. In April 1809 it was expanded to the full four battalions, although this diluted the national character of the unit, which attracted recruits from all over Europe.

In Spain, two battalions formed part of Junot’s 8th Corps in the Army of Portugal. It then spent six months fighting guerrillas, before distinguishing themselves at the sieges of Astorga and Cuidad Rodrigo.

They were part of Massena’s failed invasion of Portugal and were present at Bussaco. Their losses during the campaign meant they formed only one battalion after they reached the lines of Torres Vedras. This battalion formed the rear guard in the retreat from Portugal and fought at Fuentes d’Onoro in 1811. The rest of the year was spent on counter-insurgency, before losing its national designation on becoming Third Foreign Regiment in August 1811.

The main attraction of the unit for me was the green coat with yellow – a dash of colour amongst the blue. The figures include a few left over Warlord French line, supplemented by Front Rank. Metal and plastic give a bit more weight to the base on the table as well. The flag is the Irish Regiment version, not the earlier legion, and comes from the Flags of War range. 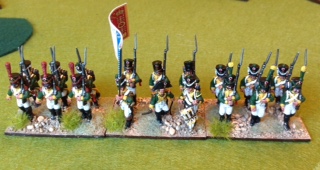