Lagertha and the shield maidens

Those watching the latest season of the TV series 'Vikings' will know that the number one shield maiden, Lagertha, has gone to Valhalla. I won't spoil the plot if you haven't caught up with the latest episode, but it's a good one, even if a bit drawn out at the end.

The story of Lagertha appears in the 12th-century Danish history by Saxo, although the modern view is that she is probably legendary - a composite of shieldmaiden characters. Saxo recounts:

"Ladgerda, a skilled Amazon, who, though a maiden, had the courage of a man, and fought in front among the bravest with her hair loose over her shoulders. All marvelled at her matchless deeds, for her locks flying down her back betrayed that she was a woman."

According to the story, she married Ragnar Lodbrok, and that was a key element of the story in the TV series. Lagertha is played by Katheryn Winnick.

There is much academic debate on the subject of shield maidens. There is certainly some historical evidence that women fought in Viking societies, including the Rus. However, it is less clear if this was a regular feature of the society in the way it is portrayed in the sagas.

For the wargamer, who cares. No Viking army should be without a unit of shield maidens and so Lagertha will live on  - on my tabletop at least!

I picked up these Bad Squiddo Games figures from Annie's stall a while ago. Well, almost a year if I am honest. Pretty sure it was at the York show, and I am off there next weekend. Lagertha comes in a mounted and dismounted version, along with a choice of companions. 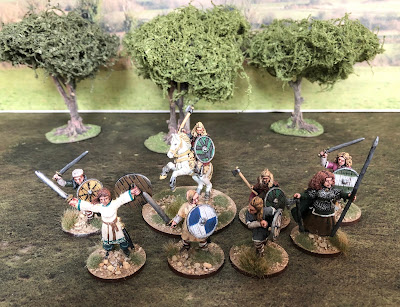 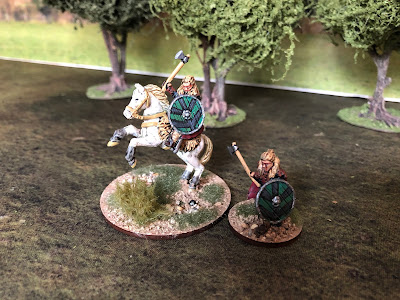