This is a new book by Bojan Dimitrijevic and Milan Micevski about the Yugoslav airbase at Bihac (Zeljava) between 1964 and 1992. 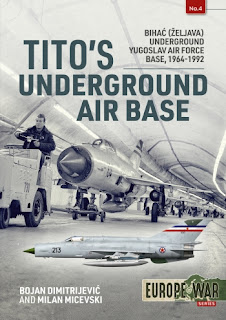 The Jugoslav Air Force and Air Defence Force (JRV i PVO) is interesting, not least because of Yugoslavia's non-aligned status, but also because of its defence strategy (whole-scale people's defence war), which had more in common with Switzerland and Sweden than other European countries. Initially equipped with US aircraft, the JRV i PVO started to receive MIG 21 aircraft in 1962. It was these aircraft that were based at Bihac.

In the mid-1950s, the JRV i PVO decided it would need to strengthen its airfield defence to include shelters and the ability to survive a nuclear attack. This led to the idea of underground shelters, despite the cost. One country that had some underground facilities was Sweden, which allowed the Yugoslavs to examine them.

Bihac was chosen because it was a central position for air defence and was close to what is today the international boundary between Bosnia and Croatia. I have visited Bihac, a very pleasant town, a couple of times and had no idea this airbase was there. The underground section known as 'The Objekt', was built under Plesevica Mountain, which had lots of natural cracks and caves. A series of galleries were constructed along which the aircraft moved before exiting straight onto one of five runways. These were quite short for takeoff, supplemented by two much longer runways for landing.

The author's take the reader through the concept and construction phases between 1958 and 1968. Then its operation phase between 1968 and 1990, based on archives and interviews with serving officers. This includes details of the many MIG 21 variants that operated from the base, mainly as part of the 117th regiment. Finally, its role in the war of 1991-92 following the breakup of Yugoslavia, which as a consequence meant the airbase was abandoned.

The book is profusely illustrated with period photographs, supplemented by more of Tom Cooper's excellent colour plates of the MIG 21 aircraft. A fascinating study.