This coming week is the 200th anniversary of the start of the Greek War of Independence. The revolution was declared on 25 March 1821 by Metropolitan Germanos of Patras in the Peloponnese. While this date is questioned by some, it is clear that the revolution broke out in various places during the latter end of March 1821, and the 25th is celebrated today as a national holiday in Greece.

There are lots of books on the revolution, and there are bound to be more this year. I have several older studies, but my favourite one in print is David Brewer's 'The Flame of Freedom', although I see he has written another book on the subject since. He covers the background to the conflict and the war itself, which lasted until 1833 when French troops finally left. 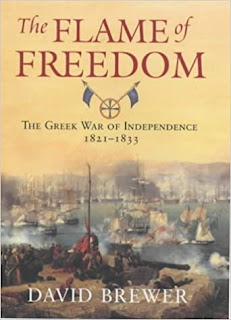 I have enjoyed the Hellenic Heritage Foundation's The Idea of Greece series of podcasts, which are a really good introduction to the subject. They are pleasantly balanced, which is not always the case on a subject prone to nationalist rhetoric.  I would also recommend the Facebook group, Wargaming the Greek War of Independence.

For the wargamer, Miniature Wargames did a two-part series in 1999, written by Spiros Koumoussis. It included some nice colour plates as well as a short history. Sadly, Spiros passed away at an early age. He also produced a range of figures for the war and a simple set of rules based on DBA.

My collection in 15mm largely comes from his range. They were based for the Principles of War rules. I have some of the excellent Steve Barber range in 28mm, although painted for the slightly earlier Serbian uprising. I would use Dan Mersey's Rebels and Patriots for the skirmish level actions, which were a feature of this conflict. There is a new range of 28mm figures from Old Man’s Creations, which look very nice.

Ottomans and Egyptians are readily available from several ranges, and the irregulars can often be used for either side. Ottoman forces were busy putting down other revolts and facing up to the Russians during this period. Initially, they relied heavily on Albanian troops and later the Egyptians, who had a modern army. It is worth remembering that the Auspicious Incident happened in June 1826, which resulted in the death and disbanding of the Janissary corps. So no Jannisaries after that date, and not many beforehand.

The Greeks had a history of seafaring in the Ottoman Empire, and the war at sea was an important feature of the war on the islands. It was the Great Power naval intervention at the Battle of Navarino that effectively secured the revolution for the Greeks. Black Seas works fine for these battles, and you can use your Napoleonic fleets. I have made a start on an Ottoman fleet. 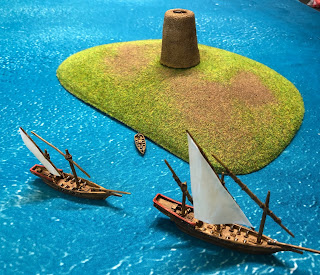 So, onto the tabletop, using Lasalle, my current favourite tactical rules for the Napoleonic period. This game was a steep learning curve in this ruleset. The army list is below and included two brigades on each side. The troop types are fairly similar as I rated the Greeks as similar to their Ottoman opponents who are listed in the army lists. The predominant militia types have the weak fire and rabble traits, bolstered by a few battalions of regulars.

With combat halted, the battle developed into a firefight along the line, which the Greeks marginally got the better of. The Ottomans withdrew to fight another day. I haven't got these armies out for some time, and with many anniversaries of this war to come, it won't be the last time! 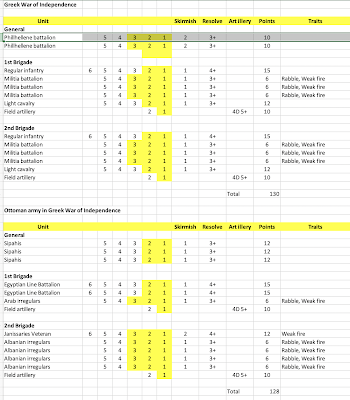