This is the third book in Bob Low's trilogy set in the Scottish borders in the 16th century. The 'Rough Wooing' conflict with England is coming to an end with Henry VIII's death, but that rarely stops conflict amongst the border reivers. 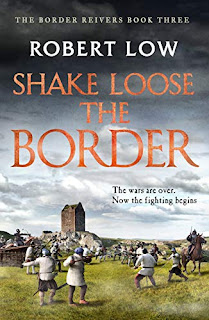 Our hero, the wonderfully named Batty Coalhouse, accepts a commission to recover an old friend captured by English raiders. This should be a simple matter of paying the ransom. However, he has been sold on to a rogue warlord, Nebless Clem, on account of his nose being sliced off. Neb being old English for a nose or snout.

Batty is captured by Clem, who doesn't want to ransom his friend, and goes further by whipping Batty. Needless to say, this sparks a campaign of vengeance while capturing his friend from Clem's band. There are more than a few twists and turns, but I won't spoil the story.

As with the other two books in the trilogy, this story captures the feel of border warfare. Small bands of light cavalry skirmishing on both sides of the border. There are a few mercenaries still around from the English army that made extensive use of such units. In this book, they include a group of Albanian Stradioti. Not sure if such a unit made it to Scotland, but it gives me some further options for games.

Stradiots in 15mm and 28mm from my collection.