The Balkans in World War Two

This is Christopher Catherwood's examination of the dilemma Britain faced in relations with Turkey and some of the Balkan states from 1939–41. It is largely based on a study of the British archives of the period, although he references recent work on the Soviet archives. Turkish primary sources are sadly scarce, so it is very much a view from the British side of the hill. 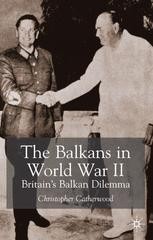 The author takes us through the various military plans and diplomatic initiatives that Britain under Chamberlain and then Churchill promoted in the period up to the German invasion of the Soviet Union. He also covers the very different views within the British leadership. In simple terms, the Foreign Office was pursuing a range of options that would engage Britain in the Balkans, while the Treasury opposed on cost-benefit terms and the Chief of Staffs regarded them as 'adventures' that Britain didn't have the military resources to indulge in.
He also argues that had Churchill been successful in dragging Turkey into the war, then that country would have suffered the same calamitous defeat as Yugoslavia and Greece. And rightly points to the Molotov-Ribbentrop Pact's impact on the Balkans, not least because most Balkan states feared the Soviets more than Germany.
I have covered some of the more extraordinary plans in previous blog posts, having studied the same archives. The Weygand plan to invade the Balkans is covered in detail, although I wasn't aware of the games being played within the French high command over this. He also deals with the crazy Allied plan to bomb the Soviet oil fields and Churchill's impractical scheme to send the Royal Navy into the Black Sea. Either of these could have resulted in Britain going to war with Germany and the Soviet Union in 1940.
Unusually for an academic historian, the author does drift into a little counterfactual history, much beloved by wargamers. In particular, he argues that had the British allowed the Balkan states to remain neutral, then there was a 'real chance' that most of the Balkans wouldn't have ended up behind the Iron Curtain in 1946. My own view is that this is a bit of a stretch given Hitler's need to secure his southern flank and the raw materials of the Balkans, not to mention Stalin's drive for buffer states. However, there are several similar interesting debates in the book.
This is an academic history with a price tag that may deter the general reader, although Palgrave often has attractive offers. However, that doesn't mean it isn't readable, and Catherwood has written books for the general reader (e.g. Churchill and Tito), which are excellent.
This book inspired me to get a move on with my 10mm Turkish WW2 project. I have played the 'Rommel' rules using 15mm, but it just didn't look right. I have painted these in the winter uniform using Pendraken figures. British equipment and French infantry as with my 15mm and 28mm Turkish armies. 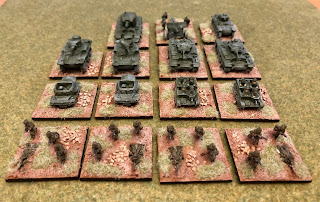 I chose a 1944 'what if' on the theme of Soviets in the Balkans for the first deployment of these Turkish units in a game of 'Rommel'. On 15 September 1944, the Soviets entered the Bulgarian capital Sofia. Instead of immediately regrouping and moving westwards to cut off the retreating Germans, Stavka ordered a concentration of forces in eastern Bulgaria, supported by additional air and naval units for around 20 days. Like Hitler, the German army group commander (Heeresgruppe F) von Weichs believed they were positioned for an attack on Turkey because there were no German units to attack in that direction. It remains unclear if Stalin was planning an offensive against Turkey, or at least suggesting to the Western Allies and Turkey that he might. The Soviet 37th Army with the Black Sea Fleet and 17th Air Army remained at full combat readiness to attack Turkey up to 13 October.
Onto the tabletop with the Red Army massing and the Turkish army (nearest to the camera) defending. 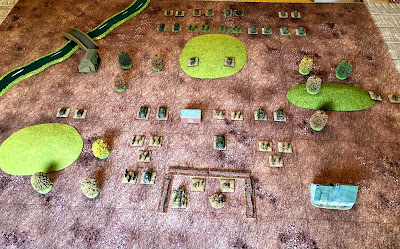 I didn't hold out much hope as the Turkish player of holding on. T34/85s against Valentines and Stuart tanks looked like a challenge. However, in particular, the Stuarts did well, and the Soviets lost a lot of units before they reached their objective, the prepared defences. Victory to the Red Army but only just. 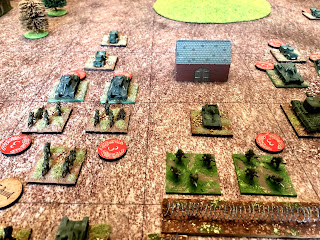 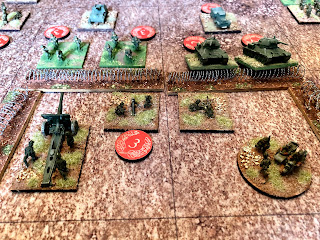 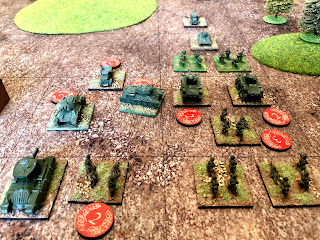