I do like an obscure conflict, and they don't come much more obscure than the Sino-Soviet border war of 1969. This is the subject of a new study by Dmitry Ryabushkin, translated by Harold Orenstein. This is the first of two volumes. 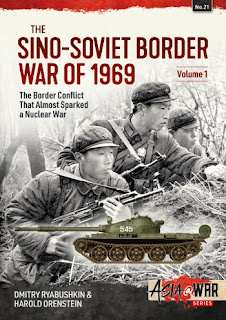 To call this a war is probably overstating the level of conflict; it was at best a border skirmish. However, it certainly had the potential to turn into a full-blown war, which with two nuclear-armed protagonists, could have been catastrophic.

There are differing views on the causes of the conflict and the events. The author sets out the historical background to the border between China and Russia along the Ussuri River, which has in theory been set down in several treaties between the two countries. Most international borders run down the middle of a river border. However, this gets more complex when there is an island, in this case, Damansky Island ( Russian) or Zhenbao (Chinese). The island is closer to the Russian side of the river and is a mere 1700 metres long by 500 metres wide. It has no real economic or military value.

It is likely that the Chinese inserted several units totalling around 300 men onto the island and laid them up in ambush. Soviet border guards spotted an insertion and went to challenge the Chinese. When they did, the ambush was sprung, and the Soviets lost around 32 men killed. Chinese casualties are less clear, but between 20 and 30 dead. All the versions are set out in detail.

The political context included the invasion of Czechoslovakia, which caused significant tensions within the Warsaw Pact. Mao saw the Brezhnev Doctrine as the precursor of a Soviet invasion of China. This sounds fanciful, but both sides had large numbers of troops and equipment on the border. There were also internal Chinese factors as this was the period of the Cultural Revolution.

Other incidents followed, which I assume will be covered in the second volume. Diplomacy then kicked in, and an outright war was averted.

There is a level of detail in this book that the general reader might regard as overkill. However, there are some very nice colour plates of the equipment and infantry uniforms. This was winter on the border, and there are a lot of similarities between the two sides. The real interest is in the 'what-ifs' of a major war. Strategy and Tactics published a boardgame The East is Red: the Sino-Soviet War, which covers these possibilities. I am sure I used to have a copy, but I can't find it. It is certainly gameable on the tabletop either as a large scale micro-armour game or as a skirmish in the larger scales. I have a nice BTR60 in 20mm, which would work, but I am probably not ready to indulge myself with the infantry. 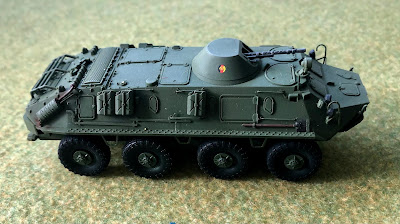