The Indian military intervention in what was East Pakistan (now Bangladesh) is the subject of a new book by Ravi Rikhye in the Helion Asia@War series. Last year, I began a project on gaming these conflicts, starting with the 1965 war and then adding the extra units needed for the 1971 conflict. This is Volume 1, looking at the war in the east. The second volume, due out later this year, will deal with the war in the west. 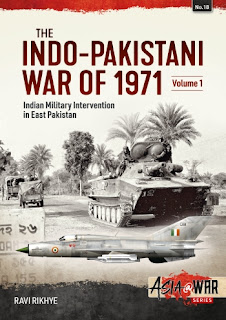 Pakistan, after the partition, had the thankless task of being a country divided into two parts, separated by 1600km on land and 5,500 nautical miles by sea. The problem was exacerbated by the concentration of power in West Pakistan, which dominated the armed forces and the civil service despite the population of East Pakistan being three times larger. The east was treated as a colony resulting in an increasingly hostile population and the development of an independence movement.

Once India decided to intervene, the Pakistan Army had few strategic options available to defend the country. The limited forces were insufficient to defend a 4,000km border with India and crucially had no reserves once the thin crust was broken. A better strategy would have been to retreat to a defensible line, but this was impossible for political reasons. The Indian Army outnumbered them five to one, with better armour and almost total control of the skies. They also had the support of insurgents who provided vital intelligence.

The Indian operational plan was to advance into the country on three fronts to secure enough territory to create the political conditions for independence. Two of those fronts made steady progress, although they faced determined resistance around some strong points. The northern front made better progress than anticipated, breaking through the limited Pakistani defences, capturing the capital Dacca, which ended the war. As a result, 93,000 Pakistani troops surrendered, making this the largest surrender since WW2.

The author starts with the background and political context, which is vital to understanding the war, particularly for readers unfamiliar with the sub-continent. The garrison of East Pakistan is broken down together with an explanation of Pakistan's strategic planning, such that it was. Only 30 battalions covered 4,000km of the front, supported by just 50 Chafee light tanks and five regiments of 25pounders. India had been supporting Bengali insurgents for some time, and their units are described in detail. The Indian land, sea and air forces had not only been modernised with Soviet support since 1965, but they were able to deter any intervention from China. Political support from the Soviets was also useful in slowing any external interventions until it was too late.

Finally, the three key elements of the campaign are described in detail. Or at least in such detail as is available given the absence of official histories. The book is lavishly illustrated with period photographs, colour plates and clear maps. This is an excellent study of the war, and I look forward to the next volume.

For the wargamer, the disparity of forces might make this conflict pretty unappealing. However, the Indians didn't have it all their own way. Pakistani strong points resisted Indian attacks in several places, and these make balanced games. They made little difference to the outcome because the Indians could bypass these strong points. Even the rivers proved to be less of an obstacle, thanks to helicopters and support from the local population.