As obscure Second World War forces go, this book covers some of the most obscure air forces around. The prolific David Nicolle and Air Vice Marshal Gabr Ali Gabr describe the Arab air forces of the early war period. 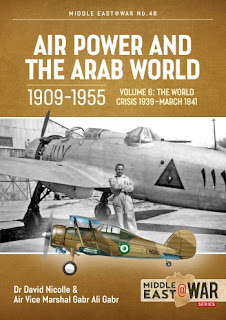 There were not many genuinely independent Arab states during WW2. Syria, Lebanon, Algeria and Morrocco were French with various degrees of autonomy. The British had a treaty with Egypt, Iraq, a mandate for Palestine, and the Gulf states. Saudi Arabia was independent and neutral but had a tiny air force.

The Royal Egyptian Air Force had support, fighter and light bomber squadrons. They were equipped with 18 Lysanders, 36 Gladiators and 15 Audax. Supplies, training and spare parts relied on the British, who didn't trust elements within the regime, particularly within the air force. The force expanded to 149 aircraft in May 1940, although many were unserviceable. While the Egyptian military elite felt that Britain was treating their country like a troublesome child. Despite the terms of the Anglo–Egyptian Treaty, the Second World War saw an effective British reoccupation of Egypt.

Despite their nominal neutrality, Egyptian airmen provided useful cover in areas where Axis forces were less of a threat. This included good cooperation with the LRDG from their bases either at Almaza on the edge of Cairo or at Suez. They also manned AA defences. Most Egyptian military losses were suffered by air defence units around Alexandria, and at the end of 1940, a conservative estimate of Egyptian casualties was put at 201.

The Royal Iraqi Air Force was substantial with older British planes like the Audax and Gladiator and more modern Italian aircraft, including the Breda Ba.65 and SM.79 bomber. They were also in the process of buying Douglas DB.8 bombers from the USA. However, it could have performed better in the Iraqi Revolt, even with German and Italian reinforcements.

The Imperial Iranian Air Force was even more powerful, with five large squadrons of Hawker Fury and Hind fighters and a squadron of Audax light bombers. However, these were obsolete when faced with the Soviet and Allied invasions.

As you would expect in this series, the book is profusely illustrated and has pages of lovely colour plates of early war aircraft. They may not have done a lot of fighting, but the story is still an interesting one. However, even I am unlikely to attempt reproducing them on the wargames table!