This new book by Christine Isom-Verhaaren covers the Ottoman navy from the Empire's beginning to the early 18th century. Essentially the galley era, although sailing ships had become an important part of the fleet by the end of this period. 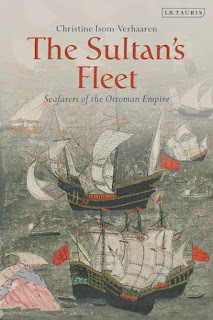 While the narrative is chronological, the focus is on senior seafarers. Some will be familiar to readers, like Kemal and Piri Reis or Hayreddin Barbarossa. However, others are less well known. Partly because their exploits are perhaps less newsworthy, and we have fewer sources.

The Ottoman Turks did not have much of a naval tradition until they expanded to the Aegean coast. Here they inherited an earlier Seljuk presence that included naval shipyards. The Byzantine naval forces were being run down in this period, unwisely relying on the Genoese for maritime assistance. The fate of Constantinople depended on control of the Straits, a lesson the Ottomans would also forget in later centuries. The stand-out naval leader was Umur of Aydin, who developed a maritime presence in the region, albeit mainly for raiding rather than winning major naval battles.

The capture of Gallipoli in 1354 was crucial to Ottoman naval development. This allowed Ottoman forces to cross the Dardanelles. Kara Mürsel was given this province, and from Gallipoli, they expanded along the Sea of Marmara. Control of the Straits also facilitated the capture of Constantinople in 1453, and Mehmed expanded the navy to face the strongest fleet in the eastern Mediterranean, Venice. Mehmed recognised the importance of naval expertise rather than simply shifting land commanders onto a ship. The tension between court officials and seafarers was an issue throughout the period covered by this book.

Piri Reis is one of the best-known Ottoman sailors because of his beautiful maps. However, his uncle Kemal Reis was the more successful naval leader. In this period, Ottoman influence was developed along the North African coast, challenging Spanish expansion in the western Mediterranean. This was developed by Hayreddin, better known as Barbarossa, and his brother Oruc. The naval expertise developed on the Barbary Coast often led to the command of the Ottoman navy in the eastern Mediterranean. In this chapter, the author covers the men of the Sultan's fleet. The oarsmen were mainly peasants, not slaves, frequently recruited from rural areas with no maritime tradition. There were sailors and soldiers, including Janissaries, who fought on ships and on land.

If there is one naval battle we all know, it is Lepanto. Its significance is often debated, but the most significant loss was sailors rather than ships that could be quickly replaced. Sipahis were less keen to serve at sea because they would be gone longer than a typical campaigning season. Hayreddin's successors, including Kilic Ali Pasha, Uluc Hasan Pasha and Cigalzade Pasha, highlight the different backgrounds of Ottman admirals.

The final period covered by the book was one of transition. While the Ottomans captured Crete, the wider naval war was less successful. The appointment of Mehmed Köprülü as Grand Vizier is seen as a turning point in Ottoman history, but less so for the navy, which suffered from frequent leadership changes. Venice had started to build and hire sailing ships for their fleet by the end of the 17th century, but so did the Ottomans on a smaller scale. Reforming regulations were introduced, although they were not consistently implemented. The Ottomans found it challenging to make the adjustment to a professional navy. Too often, palace favourites had been appointed as admirals over naval experts. After the war with Venice, the fleet declined to mainly be an anti-piracy force. It was the arrival of the Russians that started the next phase later in the 18th century.

This is a fascinating and readable history of the Ottoman navy and those who sailed its ships.

As an aside, this is the 500th book review I have written on this blog. I dare not think how much time I have spent reading and writing about these books!