Just finished C.C.Humphreys novel of the real Dracula, Vlad. This is the first novel I have read by this author who appears to be better known for the Jack Absolute series.

This is historical fiction at its best. A well researched history that keeps as close to what we know about the real historical figure, yet written with a great fast paced dialogue. The real Dracula was of course Vlad Tepes known as The Impaler after his favourite form of execution. Contrary to myth a form of execution that originated in the west - not the East. Dracula is a play on Dracul, or Dragon the knighly order he belonged to. It was of course Bram Stoker who created the vampire version, although in fact he did very little research on the original.

The novel takes us through Vlad's early years as a hostage in the Ottoman court, through several periods as Prince of Wallachia until his final defeat by the Ottomans. To this day Vlad is a national hero in Romania and many would welcome his success in stamping out crime - even if his methods were a bit robust by modern day standards!

In 2004 the GDWS display game The Real Dracula was based on Vlad's most famous battle the Night Attack. We used WAB rules as we had playtested the WAB supplement. I provided the Ottomans and the Wallachians came courtesy of my pal and fellow GDWS member Liam Entwistle. Liam is getting married today to Aileen in Glasgow so congratulations to them both. I will probably not mention to Aileen (or the priest for that matter!) Liam's interest in this period at the celebrations later! 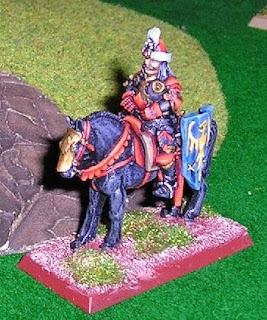 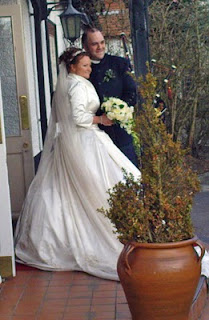 The wedding. Note Liam's period kilt. No Victorian tourist stuff for him.
Posted by Balkandave at 09:58