An Osprey title on a Balkan theme is a no brainer for me - I wonder if you can do a standing order! Phoebus Athanassiou has tackled the Greek-Italian War of 1940-41, or more accurately, the armies of the conflict. 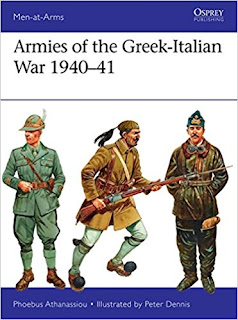 There is a very brief overview of the war, but this is not a narrative history. For that I would recommend  John Carr's 'The Defence and Fall of Greece 1940-41', or for an Italian perspective, Mario Cervi 'The Hollow Legions'. I also wrote a short article on the war for the SOTCW Journal some years ago.

Both armies are covered in some detail, including the organisation, uniform and equipment. As you would expect from Osprey, it is profusely illustrated with period photographs and colour plates by Peter Dennis. The Italian plates show a much greener uniform than I have painted my figures, but there were many shades of the standard uniform colour used, so you can justify some variety.

Air and naval forces are given a quick overview as are allies and auxiliaries. Matthew Gillingham's 'Perilous Commitments' is good on the British and Commonwealth involvement. I have a unit of the Albanian auxiliaries, which were attached to most Italian divisions, even if there contribution is debatable. 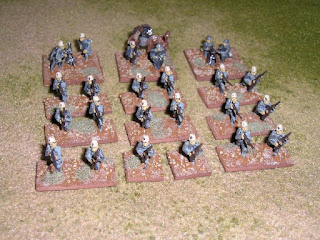 Even by the standards of the Italian leadership during WW2, this was a badly led offensive. Six months of bitter fighting in the Albanian and Pindus mountains resulted in some 90,000 Italian casualties. As the author concludes, the average Italian conscript fought bravely under the most gruelling conditions, betrayed by the shortcomings of his command.

The Greek army fought well and not only stopped the Italian forces, but pushed them back into Albania. Despite plenty of obsolete equipment, the Greek's were well placed to defeat the Italian's in the mountains. They still suffered some 60,000 casualties and many more in the subsequent German invasion and occupation.

I have armies for this conflict in 15mm and 28mm, and it is a period I regular return to on the wargame table. I have also walked over the battlefields and can recommend the museum at Kalpaki. Even in the summer you can quickly see how tough it must have been for the soldiers of both armies. 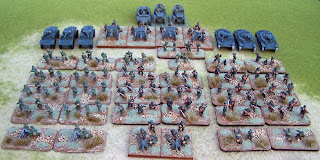