In 1943, Churchill decided to switch British support from the Serbian based Chetniks, to the largely Communist Partisans - in leadership terms from Mihailovic to Tito. This was a controversial decision at the time and one that has been condemned by revisionist histories since the war. 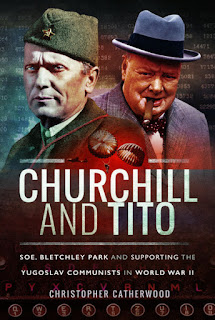 Christopher Catherwood in his book 'Churchill and Tito: SOE, Bletchley Park and Supporting the Yugoslav Communists in World War II', examines the evidence in detail. He recognises those who point to the post-war consequences, but argues that this is history in hindsight. As he says:

"In 1943 Churchill had decisions to make. And he chose as a British Prime Minister acting in the British interests against Britain's deadliest enemy the Third Reich. In that context he was surely right."

He starts with a brief history of the Balkans, focusing on the creation of the state of Yugoslavia and the period before WW2. He reminds us that the attempt to stay neutral in 1939-41 was pretty difficult for any state in the Balkans, sandwiched between Nazi Germany and the Soviet Union, who at the time had a Pact. Watching how their neighbour, Romania, was carved up, must have been a particularly difficult moment.

The author then takes each of the claimed conspiracy theories that have been offered by those seeking to rehabilitate Mihailovic and condemn Churchill's decision. These include the role of the overtly Communist, James Klugmann based in the Cairo office of SOE. The revisionists grossly overestimate Klugmann's influence in Cairo, but more importantly in London.

It is a key theme in the book that Churchill and the Chiefs of Staff reached their decision on the basis of ENIGMA/ULTRA material, made available thanks to the work of codebreakers at Bletchley Park. It was cold hard evidence that switched British policy, not a bit player in Cairo.

He goes on to explain the role of Bletchley Park and the information they provided from German sources. These included German field reports that showed how much damage the Partisans were doing, and crucially, how many German divisions were being tied down in Yugoslavia, just when the Allies were preparing to invade Italy.

This intelligence also confirmed what British officers on the ground, like Maclean and Deakin, discovered. MacLean was a Conservative MP, not a Communist sympathiser. However, even his reports did not form the basis for Churchill's decision. He like Churchill, took a pragmatic view that war is a dirty and often cynical business.

The intelligence also confirmed that Mihailovic wasn't just unwilling to seriously fight the Germans because of fear of retaliation. Cetniks loyal to Mihailovic actively fought along side the Germans and the collaborationist Nedic regime. His focus was on destroying the Partisans to secure a post-war Serbian Royalist leadership of Yugoslavia, or at the very least Greater Serbia. The evidence of collaboration was indeed stronger against subordinates like Voja Lukacevic, and it is true that the Germans still regarded the Chetniks as an enemy. However, none of that changed the fact that Tito was persuading Serbs and Croats to come together to fight the common enemy, whereas Mihailovic, a Serb nationalist, was doing very little.

Even if Churchill had backed Mihailovic, it would not have made any significant difference in 1945. Churchill presumed that the Partisans would win the civil war anyway, not least because captured Italian weapons meant they were better equipped by 1943, without Allied aid. Crucially, it was the Red Army that liberated Belgrade on 20 October 1944, albeit with partisan help. The idea that Stalin would have put a Serbian nationalist regime into power, is just a fantasy. Ask the neighbouring Romanian royal family.

Of course, Tito massacred thousands of his own people between 1945-48. However, his actions during the war meant that he was not installed as a Stalin puppet. This meant, along with the Churchill/Stalin 'naughty deal' that he was able to make a split with Stalin in 1948, and get away with it. He had kept the Soviet Union out of his country, unlike much of the rest of Eastern Europe. Nice options were not available in 1945.

This means that not only did Churchill make the right short-term decision in 1943, but he also ended up making the right call in the longer term.

This is an excellent book, throughly researched and very readable. It carefully and objectively sets out the evidence and is an must read for anyone interested in understanding the period and the how the key decisions were made.

For wargamers, this isn't a military history, its focus is on high level military strategy. There are other books that do that well. I would also recommend the memoirs of Maclean and Deakin for inspiration and scenarios.

Despite the decisions of Churchill, Tito was very nearly killed on several occasions, most famously in the Drvar raid. A game GDWS played out at the Claymore show in 2013. 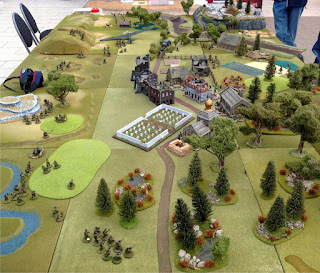