My cheery New Year reading has been 'Vlad the Impaler: Son of the Devil, Hero of the People' by Gavin Baddeley and Paul Woods. I must have missed this when it was published in 2010 and picked up a remaindered copy in Hay on Wye. 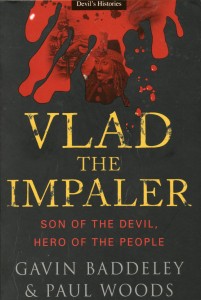 The authors start with a conventional outline of the early life and career of Vlad III Tepes who ruled Wallachia (part of modern Romania) from 1456 to 1462, with a short return spell in 1476. The name 'Dracula' comes from his father's membership of the Hungarian chivalric Order of the Dragon (Dracul), hence son of Dracul is Dracula. In Romanian, it also means 'devil'. His preferred method of execution was impalement, hence 'The Impaler'.

Vlad spent part of his early years in the Ottoman court as a hostage with his brother Radu. When he became the Voivode of Wallachia, he eliminated his opponents and then refused to pay tribute to the Ottoman Sultan, Mehmed II. The subsequent Ottoman invasion was successfully resisted including the 'night attack' battle and the infamous forest of stakes - 20,000 impaled Turkish corpses outside the capital, Targoviste. However, his subjects tired of his reign of terror and defected to his brother Radu, who supported the Ottomans. Vlad was also abandoned by his ally King Matthias of Hungary.

Vlad is remembered in Romania today as something of national hero. When I first visited Romania I remember being surprised at this, being brought up on Bram Stoker's Dracula. There is little doubt that Stoker based his fictional character on Vlad, although it remains unclear as to how much historical research he did.

If you are looking for a history of Vlad and his times, this book really isn't it. The authors start most chapters with the history, but then divert off into a range of stories that are only vaguely to the point. For example, we are offered the hypothesis that Radu, unlike Vlad, was the victim of the Stockholm syndrome as a consequence of his time in the Ottoman court. This syndrome is then explained at length, with several examples. This approach is repeated numerous times and is frankly irritating. The book needed an editor who was prepared to take a big red pen to at least a third of the content.

There are two stand out books on Vlad for me. 'Dracula, Prince of Many Faces' by Florescu and McNally, and 'Vlad the Impaler' by M.J.Trow. Either will return your investment in reading time better than this book.

Still, it was an excuse to dust down the Wallachian armies I have in 28mm and 15mm for this period. I used some of the 15mm figures for a quick game of Lion Rampant against the Ottoman Turks.

The Ottomans line up to the south led by a Pasha and Sipahi cavalry supported by Akinjis, Janissaries and Azabs. Vlad in the north with Boyars supported by Voynuks, Curteni archers and some less than enthusiastic peasants. 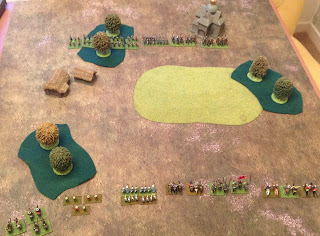 The peasants hunker down in the village while the archers take up a decent shooting position in a wood. 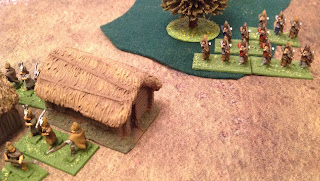 The Ottoman Sipahi go for Vlad, but are beaten off. 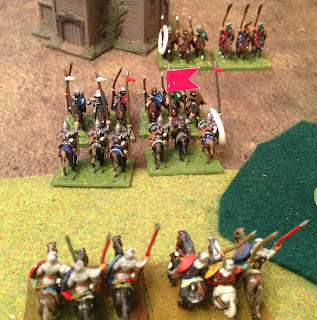 The armoured Voynuks are also too strong for the Ottoman horse. 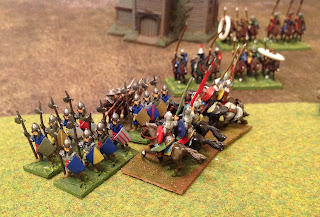 Vlad is triumphant in this refight! Vlad Dracula, national hero or sadistic villain? Possibly both.