My wife looked at my computer screen as I opened my review copy of this book and said, 'Did they write that just for you!'. The author's Konstantinos Travlos and Chris Pringle didn't, but I get her point - few titles are more likely to get my attention.

Bloody Big Balkan Battles is a set of wargame scenarios for the Balkan Wars of 1912-13, published by Brigade Games. They are written for Chris Pringle's rule set Bloody Big Battles (BBB) but can easily be adapted for other systems. If you are not familiar with these rules, they are designed for late 19th century conflicts that were often fought on a vast scale. Armies of 100,000 men on a battlefield ten miles wide are not easily accommodated on a standard wargame table. So, Chris not just scaled down the size of units but stripped out unnecessary details into a simple, yet elegant, set of game mechanics. The basic element is a base representing 1000 to 1500 men and 1" on the table represents 150-250 metres.

I first played Chris' Warring Empires rules many years ago, and the fundamental mechanisms were adapted into Principles of War (PoW), which I played extensively. They allow games up to about Corps size, but no larger. Most of my 15mm figures for the 19th century are based for PoW, although I initially used Spearhead for the Balkan Wars. 30mm square bases work very well for BBB.

This new scenario book covers the First and Second Balkan wars, a conflict overshadowed by the First World War, yet it had an enormous significance for the Balkans - redrawing many borders and tragic consequences for whole swathes of the population. Sadly, many of the tactical lessons were not learned by the Generals who commanded armies in the early period of the Great War.

The war was started by the Balkan League, a loose alliance of Serbia, Montenegro, Bulgaria and later Greece. The Ottoman Empire had been weakened by the war with Italy, internal revolts and the coup d'etat in 1912. The League took the opportunity to attack the Ottomans in Albania, Greece and Thrace. The Ottomans were defeated on all fronts, pushing them back to the lines of Chataldja, just 30kms from Istanbul. The peace treaty confirmed the Balkan League gains, but long-standing disputes over Macedonia resulted in a falling out, and Bulgaria attacked both Serbia and Greece. They failed to knock Serbia out of the war and interventions by Romania, and the Ottomans forced them to abandon the fight. I would recommend Richard Hall's book, The Balkan Wars, for a good overview of the conflict and Edward Ericksson, Defeat in Detail, for the Ottoman perspective.

The scenario book covers 14 of the critical battles of both wars. Each one describes the strategic and grand tactical situation, together with orbats and scenario rules. There is a map of each battle, which very clearly highlights the difficult nature of the terrain. The book concludes with a historical overview, profiles of the commanders and sources of further information and wargame figures.

To test the scenarios, I decided on Kilkis-Lahana, a Second Balkan War battle between the Greek and Bulgarian armies. Not least because I have visited the battlefield, which has a small museum and a significant memorial. By visit, I mean driven around - walking is not really an option for warfare on this scale. 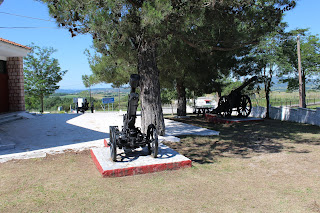 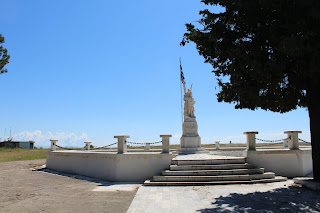 The Bulgarians are heavily outnumbered but hold entrenched positions. Kilkis is represented by the large church on the river nearest the camera. Lahanas is at the top of the table. I dusted down my old Spearhead hills, which show the different levels well. 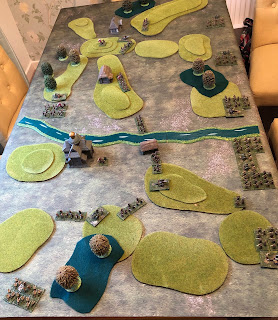 This is the Greek attack on the Bulgarian right flank around Kilkis. 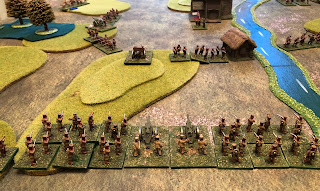 And this is the attack on the other flank at Lahanas. 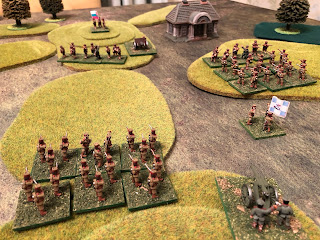 The Bulgarians made progress at Kilkis on the first day, but no breakthrough. Numbers told on Day 2, as they flanked the entrenched Bulgarian positions and forced them over the river. 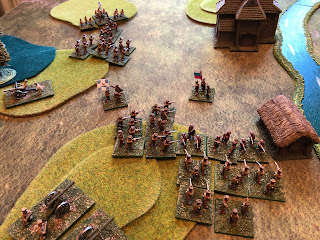 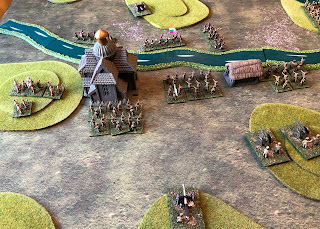 The Bulgarian lines at Lahanas held on both days, but with their right flank exposed, General Ivanov decided to withdraw to fight another day. 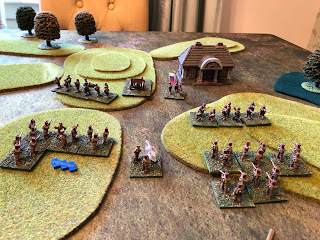 The game played pretty much as I expected and the scenarios work very well. Highly recommended, not least because it reminded me what a very good set of rules these are. Now, where are those Russo-Japanese War figures?
Posted by Balkandave at 16:10