This book looks at the Russian military intervention in Syria between 2015 and 2018. It is written and illustrated by Tom Cooper and is part of Helion's Middle East War series. 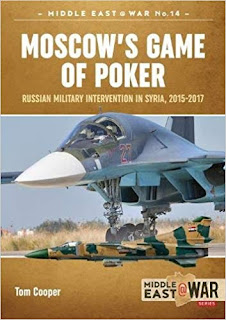 The author starts with an overview of the conflict and the reasons for Russian intervention - essentially to save the Assad regime and preserve Russian influence in the region. There are interesting sections on the geography and demography of Syria, which has an important role to play in the conflict. For example, I hadn't appreciated how mountainous and forested parts of Syria are - this is not a simple desert war.

Then a detailed chapter on the Russian units and equipment deployed in Syria. The intervention is primarily air power, operating from Hmeimem Air Base in western Syria with fighter-bombers and helicopters. Long range bombers have been deployed, mostly operating from Russia or Iran, as well as naval units. We have become used to pictures of precision bombing in recent conflicts, but for reasons of cost and technical failures, the Russian intervention has relied heavily on unguided munitions, with consequential civilian casualties.

While intervention on the ground has been limited, there were still more than a dozen Russian battalions deployed in Syria as well as specialist units such as electronic warfare brigades and missile defence groups. Three heavy artillery regiments have been deployed as well as forward observers.

The conflict is broken down into stages, which attempt to describe the complexity of the conflict. The huge number of different groups fighting on the ground and their affiliations is frankly mind-boggling. Russian intervention has largely been focused on anti-Assad forces and communities, rather than Daesh. Co-operation with the limited forces that remained loyal to Assad has been patchy, even with the Syrian Air Force. I hadn't appreciated the importance of Iranian units in propping up the regime, but they have been the most effective ground troops.

The book is lavishly illustrated with photographs and pages of colour plates, covering all the aircraft deployed by the Russians and the SyAAF. The author concludes that Russian intervention has been much less effective than the propaganda might imply.

Like so many interventions in this part of the world, it is doomed to fail because it fails to remove the principle reasons for the crisis.