No, that isn't a typo, it is 1953. Many people will be familiar with the race for Trieste at the end of the Second World War. However, this new book by Bojan Dimitrijevic covers the later crisis, when Yugoslav and Italian troops faced up to each on the border around the disputed city. 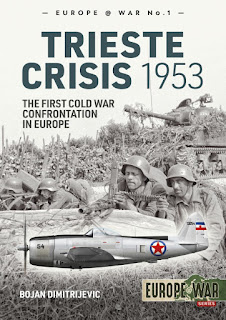 The earlier crisis is well covered in Geoffrey Cox's book, 'The Race for Trieste' (Kimber 1977). Cox was there with the 2nd New Zealand Division, which advanced from near Ravenna, past Venice, to reach Trieste before Tito's partisans could occupy all of the city. This led to an uncomfortable stand off and eventually a deal that split the area into occupation zones. It's a bit of a simplification, but in essence, the city was largely Italian and the surrounding area was largely Yugoslav.

This new book is very much a military history. The political and diplomatic background is outlined, along with the 1945 crisis and the establishment of the Free Territory of Trieste in 1947. The significant point being that when Tito split with Stalin in 1948, NATO had hopes of bringing Yugoslavia into the Alliance as a bulwark against a Soviet Advance from Hungary into Italy.

This resulted in significant military equipment being supplied to Yugoslavia under the Mutual Assistance Pact. This included 281 Sherman tanks, 97 M47 Patton tanks, and an array of SPGs and armoured cars. The air force was supplied with WW2 Thunderbolt fighters and Mosquito recce aircraft, as well as modern jets in the form of the F-84 Thunderjet.

Of course the Italian armed forces had received similar equipment as a member of NATO. The plan was use them to defend against the Soviets, not against each other!

The crisis started following the election of an unstable Italian government in mid-1953. They argued that Yugoslavia was about to occupy Zone B of the Free Territory, so Italian troops concentrated around the largely Italian Zone A. British and US troops were in the sandwich. There were a number of border incidents, which added to the tensions. Eventually, a diplomatic solution was agreed and the Free Territory was divided up, largely on ethnic grounds, in a settlement that stands to this day.

The author has undertaken a significant piece of research into the units that were mobilised and how effectively they responded. The focus is on the Yugoslav troops, but the Italian side is not ignored. A shooting war would have involved a couple of Corps on each side and these are all listed with detailed ORBATs and equipment schedules. The book is profusely illustrated with period photos and some very fine Tom Cooper colour plates. In particular, it is very strange to see Yugoslav infantry units in German WW2 helmets.

It certainly has everything the wargamer could want to game an interesting, 'what-if', Cold War confrontation in Europe.
Posted by Balkandave at 17:26