We have two new books on the German conquest of the Dodecanese in 1943. Anthony Rogers has written a straightforward military history in his Osprey Campaign series account, 'Kos and Leros 1943'. While Julie Peakman has added some colour with her extensive use of first hand accounts, in 'Hitler's Island War: The Men Who Fought for Leros'. 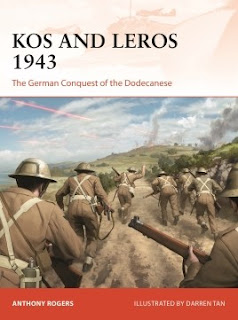 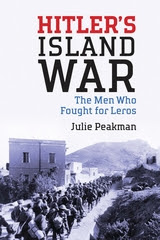 The Dodecanese, confusingly consist of not 12, but 14 islands in the south-east Aegean. The population is largely Greek, but in 1939 they were occupied by Italy following the Italo-Turkish War of 1912. By 1943 they were mainly garrisoned by Italian troops, with the addition of German garrisons on the larger islands like Rhodes. There was also a large German garrison on nearby Crete.

As the Axis was forced out of North Africa, followed by the invasion of Italy, Allied planners attention turned to the Aegean. The occupation of these islands might help efforts to get Turkey to join the war and provide air and naval bases for attacks on the Balkans. Churchill, always the champion of attacking Germany from the 'soft underbelly', favoured such an approach. However, the Americans were less than enthusiastic, viewing the strategy as a a distraction from the Italian campaign and the direct invasion of Europe.

In July 1943, Mussolini was ousted and Badoglio's new government surrendered to the Allies. The Germans responded quickly by seizing control of Rhodes, the key island with its airfields. Hitler refused to abandon the Dodecanese because of the strategic importance of the Balkans to the German war effort.

Despite this setback, the British decided to garrison Kos and Leros. Kos had an airfield and Leros a decent port. However, only one infantry Brigade was available and the islands were too far away for adequate air and naval cover. The Germans launched an invasion which overran Kos in only two days. Leros held out for longer,  but it also surrendered with some 3000 British and 5,300 Italian prisoners.

It is hard not to agree with Private Sid Bowden that the Leros campaign was 'One big cock-up, right from beginning to end'. An expedition which could not be effectively reinforced by sea or protected from the air, was probably doomed to failure. The nearest air bases where 450 miles away in Alexandria and Cyprus. Naval ships had to return to base to refuel after two nights in Aegean at the most.

Other failures included, inadequate AA guns, unjustified assumptions of Italian support and poor communications. The fortress commander, Tilney, was an artillery officer with no experience of infantry warfare. His strategy of defending the island perimeter was too ambitious for the limited number of troops at his disposal.

As for the books. The Osprey Campaign book is as usual profusely illustrated with period photos, supplemented by colour plates and battle maps. The campaign maps do miss out key features, which can make following the text on them difficult. It isn't easy to write a narrative of operational warfare, and the text is a little hard going in places.

Julie Peakman gets around this with the extensive use of letters, interviews, diaries and oral accounts. The result is a very readable book. If you read the Osprey book first, Peakman's narrative adds much to the story.

For the wargamer, this campaign offers plenty of options, from small scale actions for the key hills on the island, to small ship action around the coasts. I am currently playing quite a bit of 'Cruel Seas', and this campaign offers a number of scenarios. I have just painted up some German Pi boats, which were used to ferry troops to Leros. A number of these were sunk by British naval forces and long-range air attacks.