I am not a big fantasy player, but when in the mood, Dragon Rampant usually scratches the itch. However, I thought I would give Joseph McCullough's new rules for fantasy battles a try. I have played his skirmish games, Rangers of Shadow Deep and Frostgrave. I generally enjoyed these games, other than the use of D20 dice. Oathmark uses multiple D10s which should deliver a more consistent outcome. 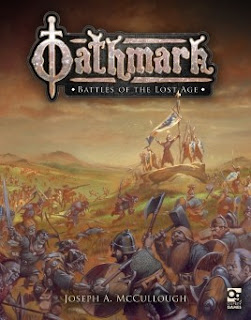 The first thing that attracted me to these rules is the absence of a fixed setting. You can pick your nation from the main fantasy Tolkein races - Humans, Elves, Dwarves, Orcs and Goblins, and can also have units from different races in the same army. There are army lists built into the rule book, with stats for most of the figures you are likely to have. Strangely, there is torsion artillery but no crossbows. Dwarves without crossbows, what is the fantasy gaming world coming to!

There is a tidy campaign system which allows for recruitment and defends your core city. While North Star do a range of figures, you can use existing ranges.

The rules are pretty straightforward. I have a few queries after my first game, but nothing major. You can download a decent QRS from Osprey.

Units are activated using two D10, needing to roll higher than their activation stat. In my game that was a 5 or 6, so the odds are pretty good that your troops will take two actions per move e.g. move and shoot. Even if you fail, a simple move is allowed.

Shooting and combat generally involve a D10 for each figure in the front line, usually five, with modifiers for ranks and the usual flank, hills etc. You deduct the fight or shoot stat from the targets defence stat, then apply modifiers. While your unit is at full strength, maximum of 20 figures in four ranks, this gives a reasonable odds. But attrition will make it difficult later in the game.

Units taking casualties have to take a morale test with modifiers for casualties. It wasn't clear if that was cumulative or in that turn. I played it as cumulative and that means units don't hang around for too long once casualties mount up.

There are a range of special abilities which reflect the different races - Orcs wild charge, that sort of thing. There are also advanced rules, which add in characterisation, magic and strange events when doubles are rolled on activation.

So, on to the tabletop, having dusted down my old fantasy figures. My first kingdom is Leonis, a play on the Latin for Lion in the North. Essentially an excuse to use early medieval Scots, with a few Dwarfs when I work out a stat for crossbows! The evil opponents (Orcs and Goblins) are Malumter, another play on the Latin. If only my Latin was this good at university Law School! 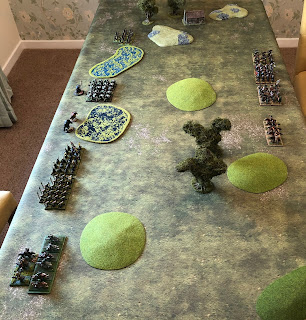 The Leonis axemen (Varangians) grabbed the hill and fought off the Orcs. However, a couple of trolls crashed into their flank and that was that. 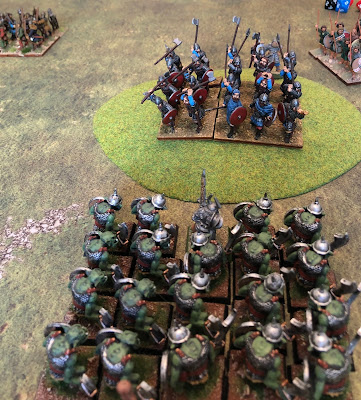 The peasant spearmen did much better holding off the trolls and two units of Goblin spearmen. Up the workers! 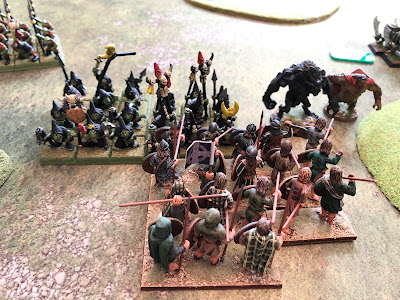 This gave the archers, who had disposed of their Goblin counterparts, time to shoot up the Trolls, recapture the hill and rain death on the disorganised enemy. Score two to the workers! 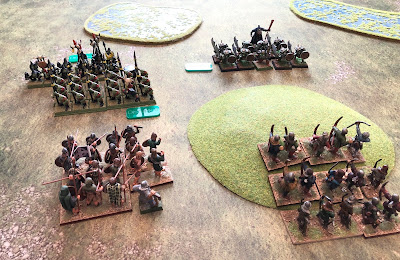 The Goblin wolf riders almost saved the day coming around the flank, but the Leonis horse fought them off. 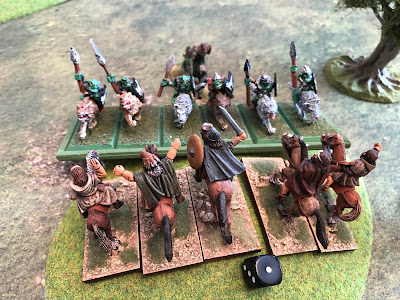 It was a good game and the rules played well. I can have some fun with imaginations and it may even inspire me to finish painting all those Conan figures.